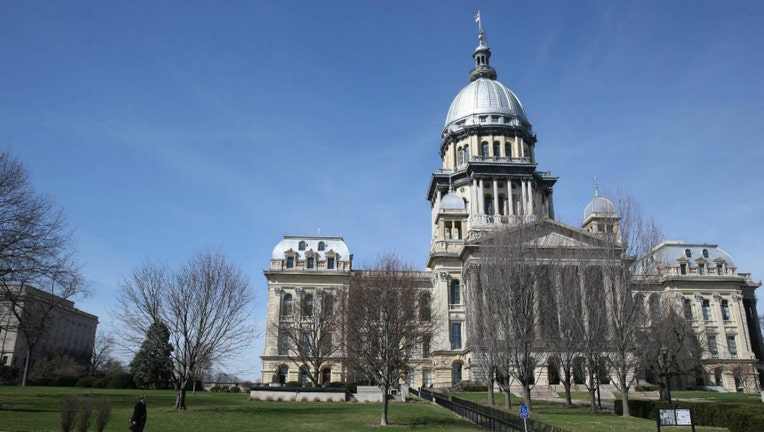 The Illinois State Capitol on March 9, 2017, in Springfield, Ill. On Wednesday, May 30, 2018, the state House voted to ratify the Equal Rights Amendment more than 45 years after it was approved by Congress, putting it one state away from possible ens

SPRINGFIELD, Ill. - Both houses of the Illinois General Assembly announced Wednesday that they have canceled legislative sessions in Springfield next week because of the threat of the spread of the new coronavirus.

Gov. J.B. Pritzker confirmed the news at a Chicago press conference where he announced the state's number of COVID-19 cases had increased to 25.

Later Wednesday, the Democrat announced that employees without substantial sick leave who must be absent from work for extended periods would be eligible for unemployment insurance under emergency rules his administration would file with lawmakers.

“We’ll continue to work together to evaluate the situation and take additional steps as needed,” said Pritzker hours after organizers announced that Chicago, like other cities around the world, had canceled this weekend’s St. Patrick’s Day celebration.

“There will no doubt be other unique challenges ahead as COVID-19 progresses in our state,” the Democratic governor said.

The number of confirmed coronavirus cases is increasing. In the U.S., the total has topped 1,000. Worldwide, more than 121,000 have been infected, and more than 4,300 have died.

The Legislature had no session days planned this week, giving members time to campaign before Tuesday’s primary election, and planned to reconvene on Wednesday. Now, the next session day for House or Senate will be March 24.

“Given the recommendations for social distancing as a safeguard to slow the spread of this virus, the Illinois Senate is going to do its part,” Senate President Don Harmon, an Oak Park Democrat, said in a statement

After weeks of health officials’ admonitions that people who feel sick should stay home from work or school, Pritzker was asked in Springfield last Friday what advice he had for hourly workers and those who generally don’t qualify for paid sick leave.

“It would be great if people have sick time, and they are sick, they need to stay home,” Pritzker said. “But I don’t disagree with you that it would be a hardship for people, particularly those who are earning minimum wage or lower-income people, when they get sick, but you’ve got to look out for your health.”

By Monday, he announced he was working on a plan to expand unemployment benefits for those forced to stay away from work. It was the same day that Illinois’ major insurance companies announced they would fully cover costs of testing for the coronavirus after Pritzker met with them to urge relief.

The federal government must approve the details of the Illinois plan, but President Donald Trump this week also said he would seek relief for hourly workers forced to miss work.

Pritzker said Wednesday that he has also begun discussions with Major League Baseball and its Chicago franchise owners as the league’s opening day, March 26, is the earliest ever. All 30 teams are scheduled to play that day, but athletic contests in Europe have been significantly altered by the coronavirus, forcing soccer and other teams to compete in empty arenas.