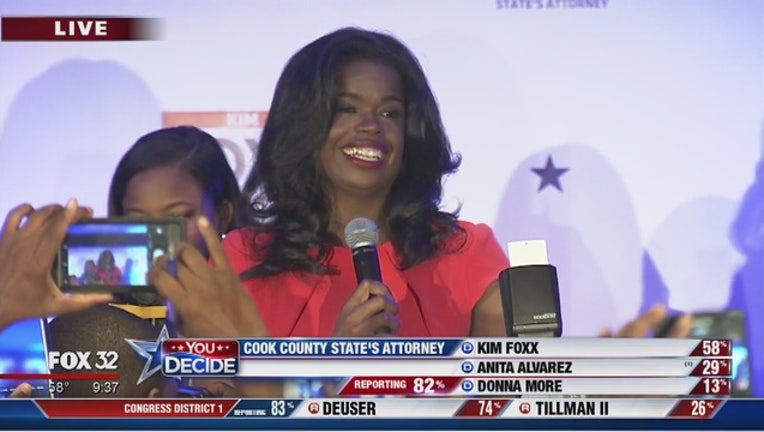 CHICAGO (AP) — The Chicago area's likely next top prosecutor handily unseated an incumbent on a wave of frustration over police shooting investigations, but even with that support she'd take over the job facing immense challenges.

First-time candidate Kim Foxx ousted Anita Alvarez in this week's Democratic primary, as the re-election bid of the two-term Cook County state's attorney was dogged by criticism over her waiting a year to charge a white police officer in a black teenager's shooting death.

Foxx, who grew up in the notorious Cabrini Green housing project, campaigned hard on questions about the Laquan McDonald shooting — highlighting an issue that echoed nationwide. The Ohio county prosecutor criticized for his handling of the investigation into 12-year-old Tamir Rice's killing also lost his Democratic primary Tuesday.

The same activists who protested Alvarez have already warned Foxx that they expect widespread criminal justice reforms and will hold her accountable. The spotlight leaves the next state's attorney to balance competing interests from law enforcement and the public amid intensifying scrutiny.

Foxx acknowledged the heightened expectations in an interview Thursday, but has navigated a careful line. She said she'll look at all cases fairly, and recognize that police officers put their lives on the line.

"I don't think you should go into this job believing that you have to appease an agenda," she told The Associated Press. "It's about justice."

Besides the outcry over police shootings, Chicago has also seen a spike in violent crime and is searching for a new police chief after the last one was fired in the fallout of McDonald's killing. Protesters have also criticized Mayor Rahm Emanuel for the city's response. He admitted Thursday the election showed an "unequivocal and unambiguous message" that agencies must collaborate to build trust, but said he didn't need an election to illustrate the responsibility.

McDonald was shot 16 times in 2014, an incident captured on squad-car video. Alvarez charged the officer with murder, but not until over a year later when a judge ordered city officials to release the video. Alvarez defended the investigation as meticulous, while Foxx and many others disagreed with the length of time it took.

"For decades in certain places injustices were allowed to fester because no one was bringing attention to these issues," she said.

On the campaign trail, Foxx argued that she's better equipped to run the office because she lived through tough issues gripping the region. When shots rang out in Cabrini Green, she and her brother would hide in the bathtub. She says she was also a young victim of sexual assault.

"It's not academic," she said. "I know what that feels like."

Still, making reforms will be difficult in the office overseeing roughly 1,500 employees in a county with a troubled history with wrongful convictions, coerced confessions and an overcrowded jail, the largest of its kind nationwide.

"There are difficulties because the culture is entrenched in a particular office," said New York Law School professor Rebecca Roiphe, a former New York County assistant district attorney. "It's not just a response to the person who's at the head of the office."

Prosecutors are also under unprecedented scrutiny. Baltimore State's Attorney Marilyn Mosby took heat for announcing charges against six officers in the death of Freddie Gray right after police wrapped up their investigation and less than a month after his death. St. Louis County prosecuting attorney Robert McCulloch's announcement that no charges would be filed against the officer who killed Michael Brown in Ferguson drew a strong response. A lawsuit seeking a prosecutor to review how McCulloch oversaw the grand jury process lingers.

Foxx said prosecutors could have avoided problems by communicating more with the public. She envisions beefing up alternative means of sentencing and more aggressively vacating wrongful convictions. She pointed to the work of Brooklyn District Attorney Ken Thompson, who's been praised for both.

A former chief of staff to the county board president, Foxx has also worked in the state's attorney's office and won with establishment backing. That included support from retired federal judge Abner Mikva, a former Democratic congressman. He said the state's attorney must also develop relationships with judges, and supported Foxx after hearing her speak about the balance of when to bring charges.

"She hit all the right buttons," he said.

Foxx is favored to win in November in the heavily Democratic region against Republican Christopher Pfannkuche.