In Chicago, Trump calls the city an embarrassment to the US

Visiting Chicago for the first time as president, Donald Trump disparaged the city Monday as a haven for criminals that is "embarrassing to us as a nation" under the leadership of its top cop, who sat out Trump's speech to protest the president's immigration policies and frequently divisive rhetoric.

CHICAGO - Visiting Chicago for the first time as president, Donald Trump disparaged the city Monday as a haven for criminals that is "embarrassing to us as a nation" under the leadership of its top cop, who sat out Trump's speech to protest the president's immigration policies and frequently divisive rhetoric.

"There is one person who is not here today," Trump told a friendly audience at a conference of police chiefs. "Where is he? I want to talk to him. In fact, more than anyone else, this person should be here because maybe he could learn something, and that's the superintendent of the Chicago Police, Eddie Johnson."

Johnson's decision to boycott the event angered the city's chapter of the Fraternal Order of Police, which said in a Facebook post that "such a gesture would be an insult to both President Trump and the office of the presidency itself and would be a mark of disgrace upon the city throughout the entire nation, including Mayor Lori Lightfoot."

But the Democratic mayor and Illinois' Democratic governor stood in solidarity with Johnson, who announced days before the International Association of Chiefs of Police Conference that he would not attend.

Lightfoot also refused to meet with Trump, and said on Twitter that she supports Johnson.

"It's no surprise that @realDonaldTrump brought his insulting, ignorant buffoonery to Chicago," the mayor tweeted. "Luckily, in this city, we know the truth and we will not let anyone - no matter how high the office - denigrate who we are as a people or our status as a welcoming city."

"Rather than belittle Chicago's communities with hateful and dishonest rhetoric, he needs to go back to D.C. and face his fate," Lightfoot said, apparently referring to the House impeachment inquiry against the president.

Trump has frequently criticized Chicago for its crime problems and status as a sanctuary city, one of scores of cities around the country that refuse to work with federal authorities to round up people who are living in the U.S. illegally. 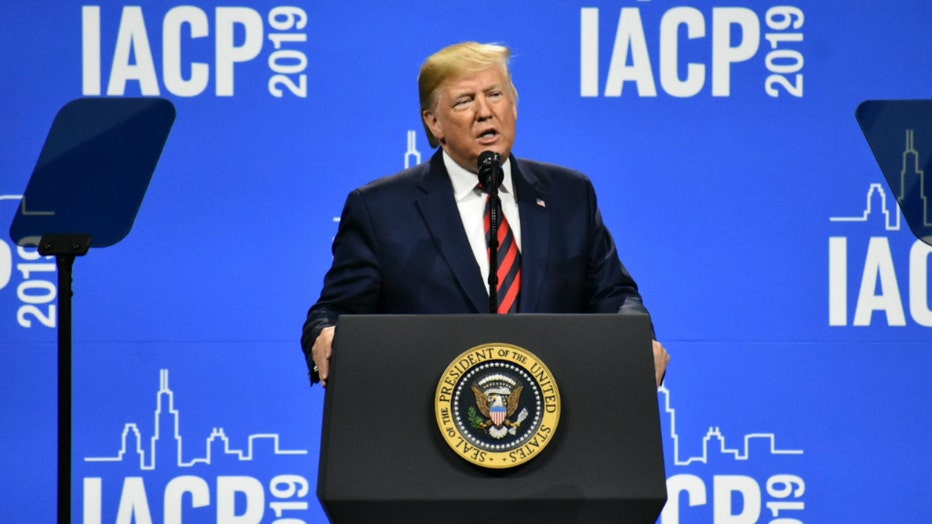 President Donald J. Trump delivers remarks and signs an executive order at the International Association of Chiefs of Police Annual Conference and Exposition in Chicago, Illinois, United States on October 28, 2019.

At a news conference later Monday, Johnson said Trump had ignored a "double digit" reduction in violent crime in the city over the past three years.

Trump has long held up the nation's third-largest city as the poster child of urban violence and dysfunctional Democratic politics.

At one point in the address, Trump turned his daily complaint about the impeachment inquiry into a swipe at "Empire" actor Jussie Smollett, who has been accused of making a false claim about being attacked by Trump supporters in Chicago earlier this year.

"You have the case of this wise guy Jessie Smollett ... and he said MAGA country did it," Trump said, using the acronym for his "Make America Great Again" campaign slogan. "It's a real big scam, just like the impeachment of your president is a scam."

The FOP Lodge 7, which represents rank-and-file Chicago police officers, announced that it had cast a vote of no confidence in Johnson. The union's president, Kevin Graham, was first to greet Trump on the tarmac of O'Hare International Airport, after he landed in the city.

In the speech, Trump rattled off Chicago crime statistics and claimed that Johnson puts the needs of people living in the U.S. illegally above those of law-abiding residents of Chicago. "Those are his values and frankly those values to me are a disgrace," Trump said. "I want Eddie Johnson to change his values and to change them fast."

During the conference, Trump signed an executive order creating a presidential commission on law enforcement to study issues like substance abuse, homelessness and mental illness. The president also announced that the Justice Department will begin a "surge" to crack down on violent crime in the United States, targeting gang members and drug traffickers in high-crime areas.

Johnson, meanwhile, is under internal investigation after he was found sleeping in a city-owned vehicle earlier this month. Lightfoot said Johnson, who called for the investigation, told her he had "a couple of drinks with dinner" before he fell asleep at a stop sign while driving home. Johnson blamed the episode on a change in his blood pressure medication.

While in Chicago, Trump headlined a campaign luncheon at his hotel in the city, raising approximately $4 million for a joint fundraising committee benefiting Trump's reelection effort and the Republican National Committee, according to the GOP.

Thousands of demonstrators rallied outside the hotel, waving colorful signs that said "Impeach Trump Now" and "Quid Pro Quo Trump Must Go." They also shouted chants such as "Lock him up" and "Trump must go."

Visiting Chicago for the first time as president, Donald Trump disparaged the city Monday as a haven for criminals that is "embarrassing to us as a nation" under the leadership of its top cop, who sat out Trump's speech to protest the president's immigration policies and frequently divisive rhetoric.

Some said they came to protest out of a fear for the country they have never felt before.

"It will take decades to put things back in place," said Caroline Mooney, a 61-year-old marketing analyst from the Chicago suburb of Tinley Park.

"If something doesn't happen next November, we may not recover," said her friend Steve Schaibley, who drove 2-1/2 hours from Livingston County.

The gathering was mostly peaceful. But two people were taken into custody after apparently attacking a man waving a Trump flag. The Trump supporter was bloodied but did not appear to have been seriously injured.