CHICAGO - The Joint Civic Committee of Italian Americans (JCCIA) said Mayor Lightfoot and the City of Chicago removed Christopher Columbus statues this past summer without jurisdiction.

Attorneys for the JCCIA said they found paperwork from over fifty years ago, which included a signed agreement that stated, "The Park District will, in perpetuity, obtain the written approval of the Joint Civic Committee of Italian Americans before making any substantial change to Columbus Plaza or the statue."

However, the committee says that was not the case.

The Arrigo Park statue was removed in the middle of the night in July, without written notice, attorneys said.

LETTER AND EXIBITS FOUND BELOW:

"We are hopeful that the Chicago Park District will honor what we feel to be a solid, enforceable contract with us," said Onesti. "These statues are very important to our community and represent generations of traditions, including the one day of the year that we celebrate our culture on the federal Columbus Day holiday. We know the original intention of removing the statues was one of safety, but that was months ago, and it is time to return them." 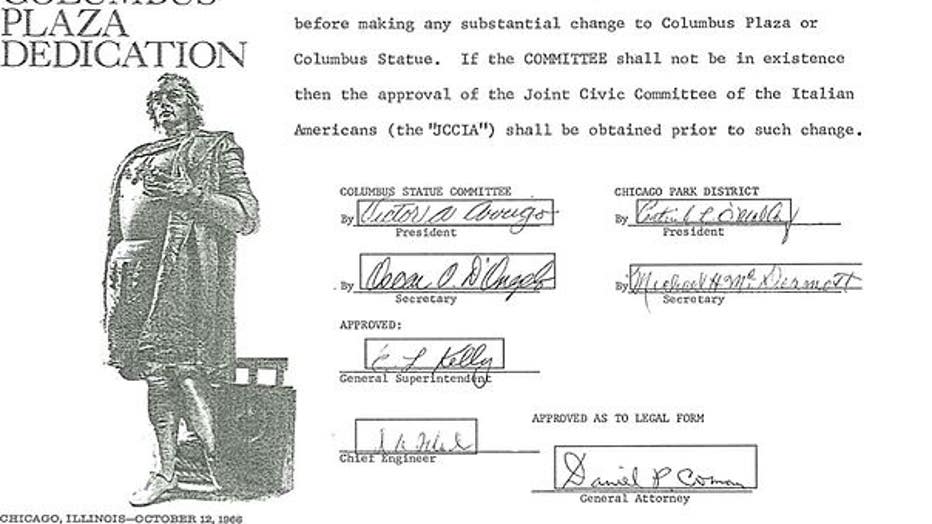 The JCCIA, a 501c3 corporation, is the congress of over fifty Italian American organizations in the Chicago area.