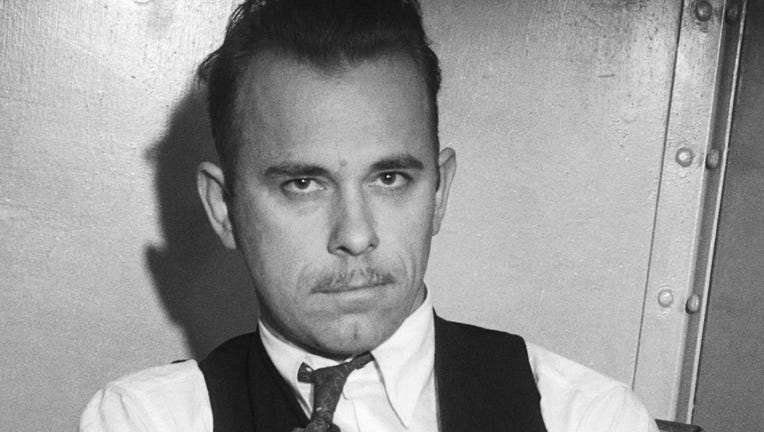 INDIANAPOLIS - A nephew of 1930s gangster John Dillinger needs a cemetery's permission to exhume the notorious criminal's Indianapolis gravesite to prove whether he's actually buried there, a judge ruled Wednesday in dismissing the nephew's lawsuit against the cemetery.

He added that Indiana law “does not require that the cemetery have a valid, rational, or meaningful reason" for withholding its consent.

Thompson sued the cemetery in August after it objected to his plans to exhume the grave as part of a television documentary. Thompson has said he has evidence Dillinger's body may not be buried there, and that he may not have been the man FBI agents fatally shot outside a Chicago theater on July 22, 1934. The History Channel dropped out of the planned documentary in September.

Attorneys for Crown Hill Cemetery call that “a decades-old conspiracy theory.” They opposed the exhumation, saying in court documents that Indiana’s Legislature has granted cemetery owners the right to “protect its gravesites from unwarranted disturbance.”

Alice McKenzie Morical, an attorney for Crown Hill Cemetery’s management company, said during Wednesday’s hearing that there was an autopsy after Dillinger’s fatal shooting and relatives identified him before his burial.

“His close family believed it was him and they wanted him in the family plot,” she said.

The cemetery's management company said in a statement that it’s pleased with Wednesday's ruling and it “continues to object to the disinterment of John Dillinger.”

The FBI insists it's a "myth" that its agents didn't kill Dillinger and that "a wealth of information supports Dillinger's demise," including fingerprint matches.

Thompson obtained an Indiana State Department of Health permit in October that calls for the remains to be exhumed on Dec. 31.

Thompson’s attorney, Andrea Simmons, told the court that her client obtained a large number of FBI files that raise serious questions about whether it is Dillinger's body buried at the hilltop cemetery.

“There is strong reason to believe that he’s not the person in the grave," she said.

Oakes said Wednesday that he questioned the cemetery’s contention that the exhumation would be disruptive.

“I don’t buy into the cemetery’s reasons, but under the statute they don’t have to have a reason that is rational,” he said.

Oakes dismissed the lawsuit without prejudice. Under Indiana law, Thompson’s attorney have 10 days to file an amended complaint citing a different section of Indiana’s law governing exhumations or 30 days to appeal the decision to a higher court.

“It may be several weeks before a final decision is made what to do next,” Simmons said in a statement.

A few days after his 1934 burial, Dillinger's father had his casket covered with a protective cap of concrete and scrap iron topped by four reinforced-concrete slabs to prevent vandals from trying to dig him up, according to Susan Sutton, a historian with the Indiana Historical Society.

Dillinger's great-great niece, Stephanie Samuels, said after Wednesday's hearing that she and other relatives planned to file a formal complaint objecting to any exhumation.

“This should never have gotten this far. I think it’s very disgraceful to the family, everything to do with it,” she said. “And there is very much family against this."