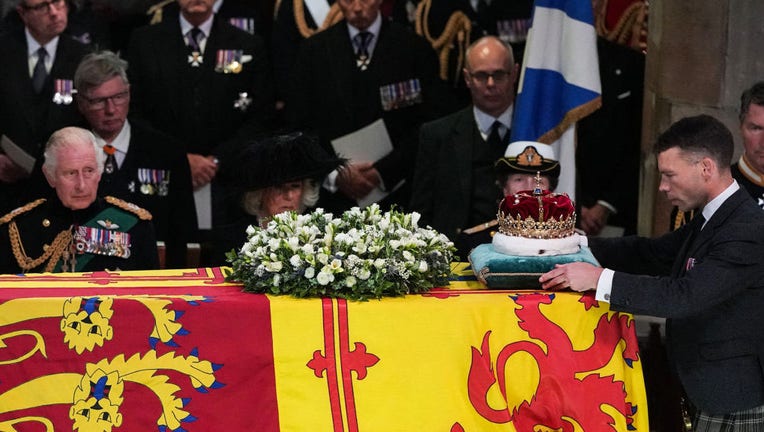 LONDON - As Queen Elizabeth II’s four children walked silently behind, a hearse carried her flag-draped coffin Monday along a crowd-lined street in the Scottish capital to a cathedral, where a service of thanksgiving hailed the late monarch as a "constant in all of our lives for over 70 years."

Four days after the 96-year-old queen died at Balmoral Castle in the Scottish Highlands, a military bagpiper played as her oak coffin, draped in the red-and-yellow Royal Standard of Scotland, was borne from the Palace of Holyroodhouse in Edinburgh in a solemn procession.

King Charles III, dressed in army uniform, and his siblings Princess Anne, Prince Andrew, and Prince Edward walked behind as the hearse traveled to St. Giles’ Cathedral, flanked by a bearer party of the Royal Regiment of Scotland and a detachment of the Royal Company of Archers, the king's ceremonial bodyguard in Scotland.

EDINBURGH, SCOTLAND - SEPTEMBER 12: People gather in tribute as the cortege carrying the coffin of the late Queen Elizabeth II passes on September 12, 2022 in Edinburgh, Scotland. King Charles III joins the procession accompanying Her Majesty The Queen's coffin from the Palace of Holyroodhouse along the Royal Mile to St Giles Cathedral. The King and The Queen Consort, accompanied by other Members of the Royal Family also attend a Service of Prayer and Reflection for the Life of The Queen where it lies in rest for 24 hours before being transferred by air to London. (Photo by Peter Summers/Getty Images)

Inside the church, the coffin was placed on a wooden stand and topped with the golden Crown of Scotland, encrusted with 22 gems and 20 precious stones along with freshwater pearls from Scotland’s rivers.

"And so we gather, to bid Scotland’s farewell to our late monarch, whose life of service to the nation and the world we celebrate. And whose love for Scotland was legendary," said the Rev. Calum MacLeod.

Because the queen died at her summer home of Balmoral, Scotland has been the focus of the world’s attention for the first part of Britain’s 10 days of national mourning. Large crowds have lined the route as her coffin journeyed from the castle to Edinburgh, underscoring the deep bond between the queen and Scotland. That bond persisted even as relations soured between the Conservative U.K. government in London and the pro-independence Scottish administration in Edinburgh.

Church of Scotland Moderator Iain Greenshields said "most of us cannot recall a time when she was not our monarch."

"Committed to the role she assumed in 1952 upon the death of her beloved father, she has been a constant in all of our lives for over 70 years," he said. "She was determined to see her work as a form of service to others."

The coffin will remain at the cathedral until Tuesday so the public can pay their respects. Thousands lined the 0.7-mile (1 kilometer) route between palace and cathedral, some arriving hours early to catch a glimpse of the coffin.

"I just wanted to be here, just to show … last respects. I cannot believe she is dead," said Marilyn Mclear, a 70-year-old retired teacher. "I know she was 96, but I just cannot believe the queen’s dead."

One man shouted at the passing hearse, while others called out: "God save the king!" But the procession was greeted mostly with a respectful silence under a blue sky flecked with clouds.

After the service, many mourners filing past the coffin in Edinburgh stopped briefly and bowed their heads before moving on.

Charles, Anne and Edward all wore military uniforms, but Andrew did not. The Royal Navy veteran was stripped of his honorary military titles and was removed as a working royal over his friendship with the notorious U.S. sex offender Jeffrey Epstein.

Charles later donned a kilt as he visited the Scottish parliament, where he was greeted by First Minister Nicola Sturgeon.

"The queen, like so many generations of our family before her, found in the hills of this land and in the hearts of its people a haven and a home," Charles told Scottish lawmakers. 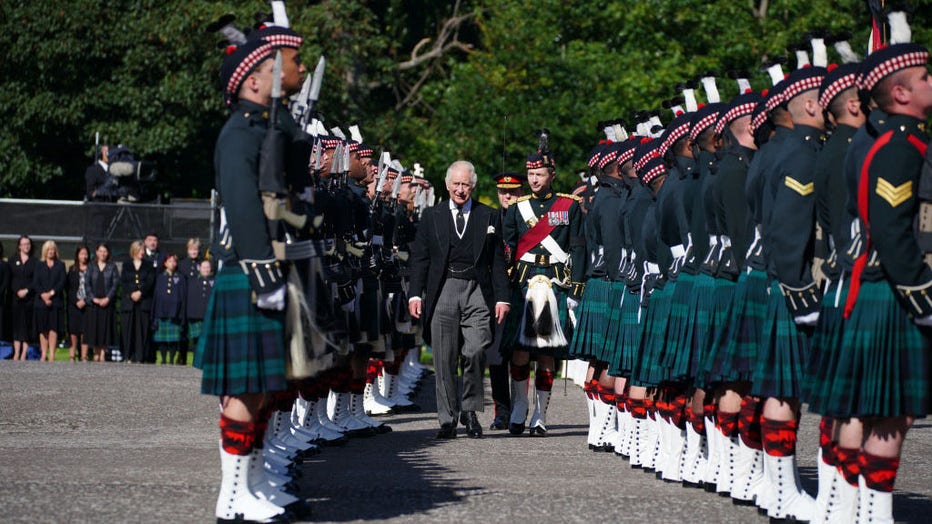 King Charles III inspects the Guard of Honour as he arrives for the Ceremony of the Keys at the Palace of Holyroodhouse, on September 12, 2022, in Edinburgh, Scotland. (Photo by Peter Byrne - WPA Pool/Getty Images)

Earlier, the queen's grandson, Prince Harry, hailed her as a "guiding compass" and praised her "unwavering grace and dignity."

The government, meanwhile, announced the nation will observe a minute of silence on Sunday, the evening before the queen's funeral. The "moment of reflection" will take place at 8 p.m. (1900 GMT, 3 p.m. EDT).

Before flying to Scotland, Charles received condolences at Parliament on Monday and told lawmakers he would follow his late mother’s example of "selfless duty."

Hundreds of lawmakers crowded into the 1,000-year-old Westminster Hall for the service, rich in pageantry, in which Parliament offered its condolences to the king. A trumpet fanfare greeted him and Camilla, the Queen Consort.

Charles told the House of Commons and the House of Lords that he would follow his late mother in upholding "the precious principles of constitutional governance" that underpin the U.K.’s political system. 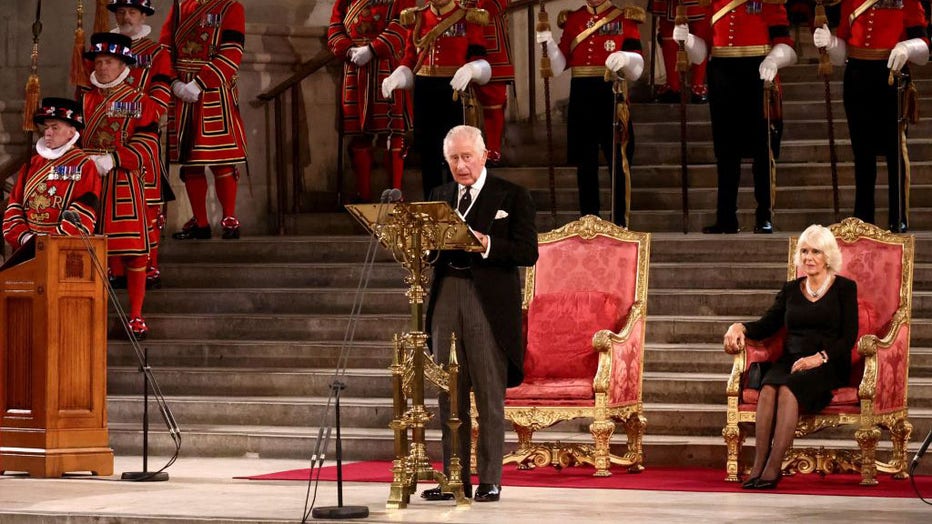 Britain's King Charles III attends the presentation of Addresses by both Houses of Parliament in Westminster Hall, inside the Palace of Westminster, central London on Sept. 12, 2022, following the death of Queen Elizabeth II on September 8. (Photo by

"As I stand before you today, I cannot help but feel the weight of history, which surrounds us and which reminds us of the vital parliamentary traditions to which members of both Houses dedicate yourselves, with such personal commitment, for the betterment of us all," Charles said.

The ceremony was held in Westminster Hall because monarchs are not allowed inside the House of Commons. That rule dates from the 17th century, when King Charles I tried to enter and arrest lawmakers. That confrontation led to a civil war which ended with the king being beheaded in 1649.

In a personal tribute to his grandmother, Prince Harry said he cherished their times together "from my earliest childhood memories with you, to meeting you for the first time as my Commander-in-Chief, to the first moment you met my darling wife and hugged your beloved great-grandchildren."

Amid acrimony in the House of Windsor, Harry quit as a senior royal and moved to the U.S. two years ago. On Saturday, there was a possible sign of a reconciliation as Harry and Meghan joined his brother Prince William and sister-in-law Catherine in meeting mourners outside Windsor Castle.

Harry’s statement ended on a poignant note, alluding to the death of his grandfather, Prince Philip, last year: "We too smile, knowing that you and grandpa are reunited now and both together in peace."

The queen's coffin will be flown Tuesday to London, where it will lie in state at the Houses of Parliament from Wednesday afternoon until the morning of her funeral on Sept. 19. U.S. President Joe Biden is among those planning to attend the service at Westminster Abbey, along with heads of state and royalty from around the world.

Authorities already have issued rules for people wanting to pay their respects in London.

Vanessa Nathakumaran showed up more than two days early to stake out a place, hoping to be first in line. "I really, really want to be part of it," she said.

Judging by the size of the crowd in Edinburgh, the line behind Nathakumaran will be long.

Rosamund Allen, 67, came to Edinburgh from Rothbury in northern England to be part of history.

"It was very moving. It was very quiet," she said. "I felt very sorry for the family itself to be on show. They are very brave to do that. And I really hope and pray that they get something out of today and have a chance to mourn themselves.

"They were very kind to allow us to be part of their sadness."

RELATED: The Queen’s corgis to be taken in reportedly by Prince Andrew and Sarah Ferguson

Editor's note: Pool video has since been removed from this story due to usage restrictions from the royal family.