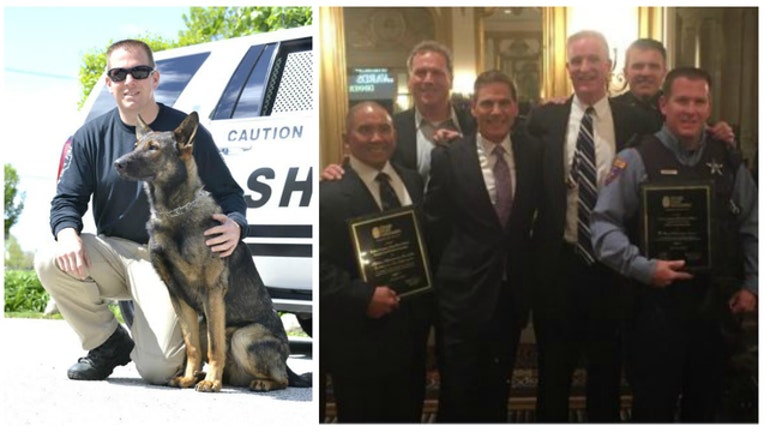 CHICAGO (SUN TIMES MEDIA WIRE) - Two Lake County sheriff’s deputies and a police dog were awarded ‘Stars of Distinction’ for their service at the awards banquet on Wednesday.

Deputy Robert Skrypek was given the Lifetime of Service award for his career at the Lake County sheriff’s office beginning in 1995, according to a statement from the Lake County sheriff’s office. He served in numerous divisions, such as the Criminal Investigations Division and the Cyber Crimes Unit, but currently works as a field training officer. Skrypek is credited with tracking down “dead beat dads,” investigating child pornographers, solving burglaries and apprehending violent criminals.

Deputy Craig Somerville and his K-9 partner, Diesel, were awarded the Chicago Crime Commission Paws of Distinction Awards, according to sheriff’s office. Diesel’s career began in January when he located 29 wrapped bags of heroin, three bags of crack cocaine, one bag of powder cocaine and a gun all hidden in a vehicle. Diesel also stopped two burglars without injury, located a bank robber along with his gun and the stolen money and tracked down a suicidal woman who ran away after cutting herself.

“I couldn’t be more proud of how Deputy Skrypek, Deputy Somerville and K-9 Diesel represent the Lake County sheriff’s office. It was a true honor receiving such prestigious awards last night from the Chicago Crime Commission,” said Lake County Sheriff Mark Curran in the statement.