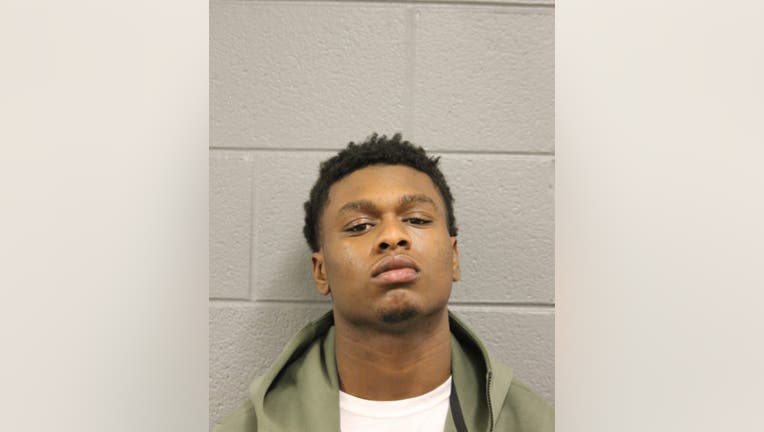 CHICAGO - Bail was denied Wednesday for an alleged member of the Insane Vice Lords street gang who is charged with killing another man in an ambush attack outside a fast food restaurant in Austin.

Alex Thomas, 20, faces a count of first-degree murder in the Nov. 8 shooting that left 25-year-old Lavell Mathis dead in the parking lot of Whale Fish and Chicken at 4955 W. Madison St., according to Cook County prosecutors.

Just before 1 a.m. that day, surveillance cameras recorded Mathis walk into the restaurant and order food as a 2004 Pontiac Bonneville with tinted windows pulled into the parking lot, prosecutors said.

When Mathis walked out and started toward his own car, Thomas allegedly got out of the Bonneville and followed him.

Thomas fired multiple times with a .40-caliber handgun, striking Mathis repeatedly, prosecutors said. After Mathis fell to the ground, Thomas allegedly went through Mathis’ pockets before returning to his own car.

A watch belonging to Mathis was found in the car, prosecutors said.

Detectives also found multiple photos posted to Facebook that showed Thomas in the Austin area hours before the shooting and wearing clothing that matched what the shooter was seen wearing in surveillance footage, including a distinctive Gucci belt, prosecutors said. A sweatshirt that matched the shooter’s was also allegedly found in Thomas’ home and tested positive for gunshot residue.

Prosecutors said Thomas is a documented member of the Sane faction of the Insane Vice Lords, but did not say whether a gang dispute was believed to be the motive for the attack.

Thomas was arrested Sunday at a home where he had recently been staying, prosecutors said.

Thomas was convicted of a 2019 aggravated unlawful use of a weapon charge, and has several convictions for weapon and drug offenses as a juvenile, prosecutors said.

“People can change hoodies and sweatshirts and wear Gucci belts,” David Geiger, a private defense attorney for Thomas, said in response. “If you’ve been on the street, people dress alike in these neighborhoods, even exactly alike is relatively common.”

Geiger also noted that the Bonneville was found behind Thomas’ mother’s house, where several adults were living at the time.

Judge David Navarro ordered Thomas held without bail, saying the circumstantial evidence, when taken together, led him to find it was likely that Thomas was the shooter.

Thomas was expected back in court Dec. 7.