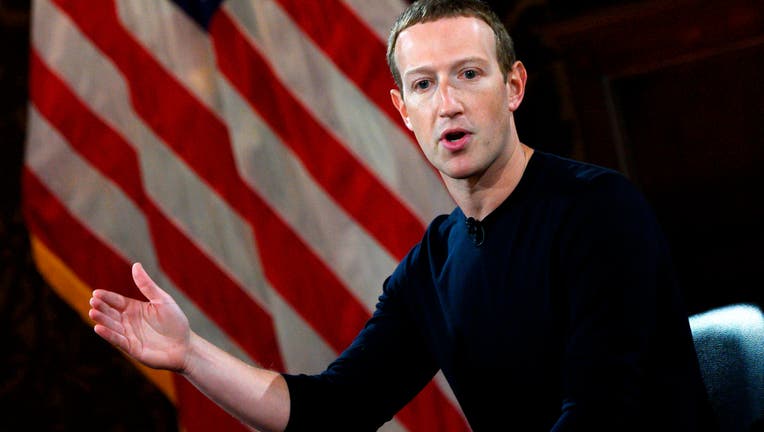 FILE - Facebook founder Mark Zuckerberg speaks at Georgetown University in a 'Conversation on Free Expression" in Washington, DC on October 17, 2019.

The top executives at Google and Facebook are being accused of conspiring together by approving a secret deal that gave Facebook an advantage in online advertising auctions.

Attorneys for Texas and other states, according to court filings obtained by Fox News, say that the 2018 deal between tech giants potentially violated antitrust laws by giving Facebook unlawful advantages in Google’s advertising exchange.

Sandberg reportedly referred to the agreement as a "big deal strategically."

"The halcyon days of Google’s youth are a distant memory. Over twenty years ago, two college students founded a company that forever changed the way that people search the internet," the lawsuit reads. "Since then, Google has expanded its business far beyond search and dropped its famous ‘don’t be evil’ motto. Its business practices reflect that change. As internal Google documents reveal, Google sought to kill competition and has done so through an array of exclusionary tactics, including an unlawful agreement with Facebook, its largest potential competitive threat, to manipulate advertising auctions. The Supreme Court has warned that there are such things as antitrust evils. This litigation will establish that Google is guilty of such antitrust evils, and it seeks to ensure that Google won’t be evil anymore."

Frances Haugen, a former product manager for Facebook, testified before a Senate committee investigating online safety for children, revealing the company's practice of choosing profit over actions that would further protect users. Haugen provided the committee with documents that she said "prove that Facebook has repeatedly misled us about what its own research reveals about the safety of children, its role in spreading hateful and polarizing messages, and so much more."

The recently unredacted suit also alleges that Google misled publishers and advertisers regarding the way it prices and carries out ad auctions and created secret algorithms to hike prices for some buyers while deflating revenue from certain advertisers.

In a statement to Fox News, Google said that the lawsuit is "full of inaccuracies and lacks legal merit."

The company also rejected the accusation that Pinchar was involved in a secret agreement and said "We sign hundreds of agreements every year that don't require CEO approval, and this was no different."

"Our advertising technologies help websites and apps fund their content, and enable small businesses to reach customers around the world," Google added. "There is vigorous competition in online advertising, which has reduced ad tech fees, and expanded options for publishers and advertisers. We’ll continue to fight this meritless lawsuit in court."

Facebook, now known as Meta and is not a defendant in the lawsuit, provided a statement to Fox News saying that its agreement with Google is similar to agreements with other bidding platforms.

"Meta’s non-exclusive bidding agreement with Google and the similar agreements we have with other bidding platforms, have helped to increase competition for ad placements," the statement said. "These business relationships enable Meta to deliver more value to advertisers while fairly compensating publishers, resulting in better outcomes for all."