Lightfoot, appearing at times emotional and exasperated, vowed that the city’s schools are ready for students to return.

CHICAGO - Chicago Mayor Lori Lightfoot is warning the city’s teachers union Thursday that "enough is enough" and a deal must be struck immediately to reopen public schools during the coronavirus pandemic, as students suffering from "failing grades, depression [and] isolation... cannot afford to wait any longer."

Lightfoot made the powerful declaration as tens of thousands of K-8 students in the nation’s third-largest school district lost what was supposed to be their first week back for in-person learning.

Chicago Public Schools -- for the sixth time in a little over a week -- told parents to keep their children home for remote learning Thursday as its bitter dispute with the Chicago Teachers Union over reopening conditions is delaying students from returning to classrooms.

"We need our kids back in school. We need our parents to have that option. It should not be that CPS parents out of all our schools in our city are the only ones who don’t have the options for in-person learning," Lightfoot said. "It cannot be so, that a public school system denies parents that right.

"And let me emphasize again, remote learning works for some, it absolutely doesn’t work for everyone – not by a long shot," she added.

With bedrooms replacing classrooms for nearly one year, local students say they are&nbsp;struggling in so many ways.

Lightfoot, appearing at times emotional and exasperated, vowed that the city’s schools are ready for students to return. CPS originally planned on welcoming K-8 children back Monday but has had to keep pushing back that date as the union has instructed teachers to continue working remotely during negotiations.

CHICAGO PUBLIC SCHOOLS BACKS DOWN ON THREAT OF LOCKING TEACHERS OUT, WHILE UNION SAYS IT’S ‘WINNING’

"We cannot return to in-person instruction until we have made more progress with the district on CDC-based health metrics, allowing educators with medically vulnerable family members to continue to teach remotely, and addressing real equity needs for the vast majority of our students -- particularly Black and Latinx students who continue to learn remotely," the CTU wrote in an open letter to parents Thursday released just minutes ahead of Lightfoot’s news conference.

Lightfoot is arguing that CPS already demonstrated that public schools could be operated safely in Chicago when they brought pre-K and special needs students back to classrooms for in-person learning in early January. But later that month, those educators started teaching remotely again following a CTU vote – although some, including the district’s principals, are continuing to report in-person, Lightfoot says. 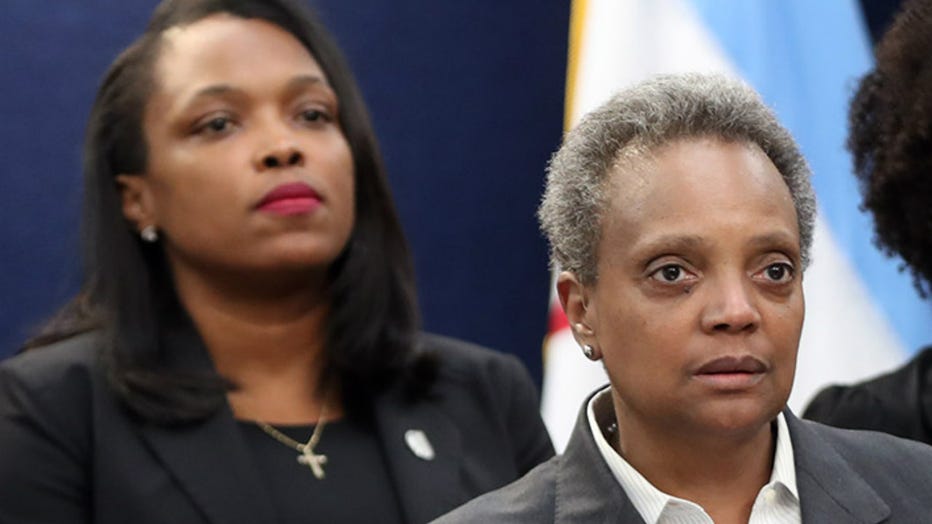 "CPS had three weeks of successful implementation of these mitigation plans in our schools, that was until the CTU blew up and created chaos that we are now enduring," Lightfoot said.

"Let me remind you of the over $100 million dollars in mitigations that CPS has invested in our schools to make them safe," she added. "They have included: ventilation, testing, health screenings, face coverings, enhanced cleaning and other in-school safety measures."

Lightfoot also said amidst a backdrop of a citywide 5% coronavirus positivity rate, "after 80 plus meetings and going above and beyond to address the CTU leadership’s various issues and concerns, we are out of runway."

"I’m going to keep repeating these numbers and metrics because they are devastating and should create a sense of urgency in all of us to do the right thing for our kids in this difficult time – black and brown kids, who look like me, coming from circumstances like the one I grew up in, who are struggling. And are failing. We are failing those children by not giving them the option to return to school," she said. "Failing grades. Depression. Isolation and so much more."

Lightfoot and CPS' CEO released a statement Thursday evening saying, "Late this afternoon, we received a counter proposal from CTU leadership and we are working on a response."

Although the union didn't go into specifics of the counter proposal, the main sticking points include health metrics, vaccines and accommodations for employees or their family members who are at high-risk.

CTU held a virtual press conference with parents and said 100 teachers are locked out of online instruction.