Surveillance video obtained by FOX 32 News shows a white sedan driving east on Webster and turning onto Wayne Avenue before coming to a stop. A person in a light-colored hoodie gets out and moves to the corner of a building at the intersection where he peeks around the corner down the sidewalk.

CHICAGO - Dakotah Earley moved to Chicago six months ago to study culinary arts and figure out what to do with his life.

His family says the 23-year-old is "a gentle giant" who "would’ve given the shirt off his back to anyone in need."

On Friday, Earley was robbed of his phone and shot three times in Lincoln Park in what the local alderperson said was a "shocking incident."

He remains on life-support and will have one of his feet amputated to save the rest of his leg, family said.

"Dakotah is fighting as hard as he can right now," his brother DeShawn Earley wrote Sunday on a GoFundMe online fundraising page.

Chicago police said Dakotah was robbed and shot by two people wanted in at least seven similar robberies on the North Side this month.

Dakotah Earley was walking on a sidewalk at Webster and Wayne avenues around 3 a.m. when he was confronted by a gunman who stepped out from behind a building, pointed a gun and demanded his cellphone. 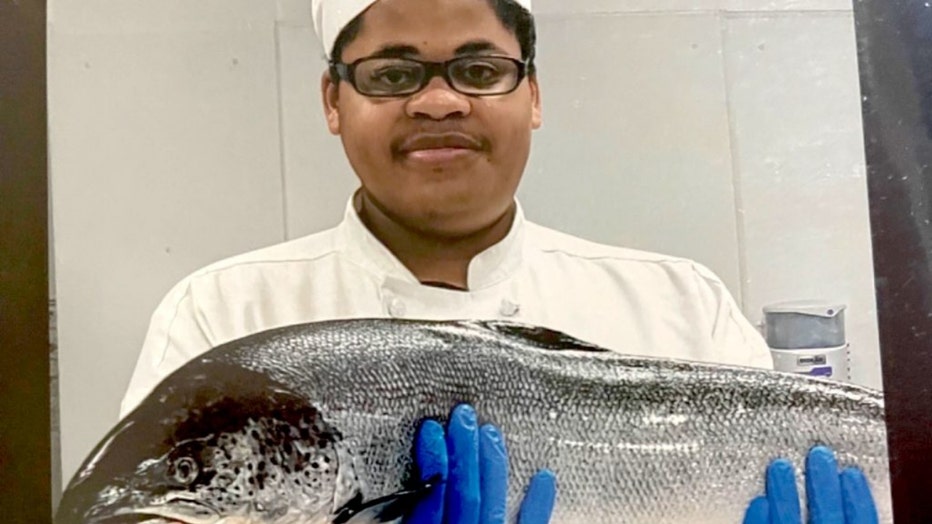 Dakotah Earley moved to Chicago six months ago to study culinary arts and figure out what to do with his life. (GoFundMe)

Surveillance video shared with the website CWB captured him struggling with the gunman who took his phone and demanded the passcode. The gunman then opened fire at close range and shot him three times in the head and back, police said. He is hospitalized at Illinois Masonic Medical Center.

The gunman’s accomplice could be seen getting out of a white car during the struggle, according to the video. No one had been arrested as of Monday, police said.

Detectives are seeking tips from the public to identify the pair wanted in Earley’s shooting and several other robberies, including one just minutes after the one that wounded Earley, Chief of Detectives Brendan Deenihan told reporters Monday.

He said police were looking for several suspects that used the white car and other possible tail cars.

"We definitely need help," Deenihan said. "I have no doubt that there are people out there that they know exactly who those offenders are, and we need that information. And then the detectives can do their job and remove them from the streets."

Dakotah Earley had been taking a break from work and school "to focus on some other things in his life, with a plan to return when he felt ready," posted DeShawn Earley, who declined an interview Monday. "He did not deserve this."

Dakotah Earley remained in critical condition over the weekend, but began showing signs of improvement Monday, his brother wrote.

"The doctor’s are now optimistic about Dakotah’s left leg," his brother wrote Monday. "However, they he will be amputating his left foot due to the lack of blood flow in it."

He had been scheduled for surgery on his stomach Saturday, but it was postponed until Monday because "his body was too weak," he wrote.

Dakotah Earley’s kidneys also began failing on Saturday and he began dialysis. His brother said he "has done well on it so far."

"His condition remains critical and he continues to receive a lot of support from several different machines," DeShawn Earley wrote. "We strongly believe the prayers we are receiving are being heard and Dakotah is fighting as hard as he can right now."

CPD to "scale up" resources

On Monday, police Supt. David Brown said the department was ramping up resources across the city in preparation for warmer weather that typically sees more violence.

"We are going to be very flexible in the way we scale up our resources, so look for not only extra resources in Lincoln Park. We talked about the CTA, we’ve talked about downtown, we’ve talked to about this focus on the 55 beats that drive shootings and homicides," Brown said. "So all of those areas to include Lincoln Park will see increased resources. Not just flooding, but specific to the blocks that we are seeing these crimes happen."

Brown didn’t provide specific numbers. And his comments mirror what he’s said in past weeks about moving some officers part-time off of administrative duties and onto the streets to combat higher crime in areas like downtown.

"We still need to add more resources to our downtown, to our CTA, as well as to all of our neighborhoods throughout the city, as it gets warmer," Brown said Monday.

"We already know that so we are anticipating adding before we get to the Memorial Day weekend, or Fathers Day or 4th of July weekend. So more to come as it relates to adding more and more resources. This will call for our adjustments to our schedules for our officers so it’s not done lightly — because officers’ schedules are something that we really are concerned about when it comes to wellness, so we try to balance the two."