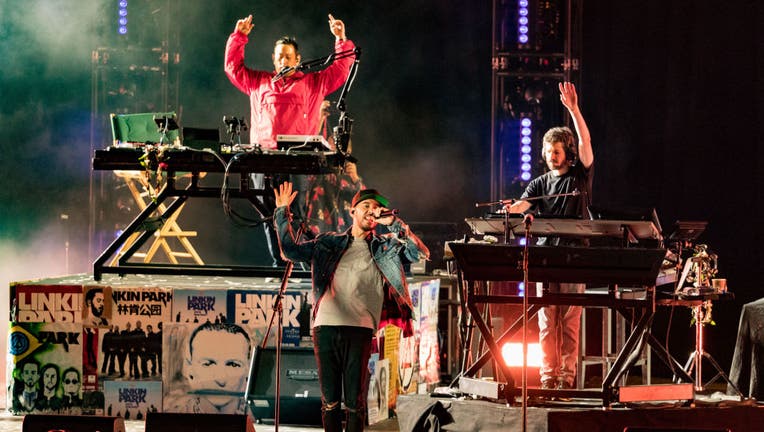 Musicians from Linkin Park; Brad Delsen, Mike Shinoda and Joe Hahn perform during the "Linkin Park And Friends Celebrate Life In Honor Of Chester Bennington" concert at the Hollywood Bowl on October 27, 2017 in Hollywood, California. (Photo by Christ

Linkin Park is the latest music act to join the list of artists banning their music from President Trump's reelection campaign.

The band issued a cease and desist after their hit song "In the End" was featured in a video shared by White House social media director Dan Scavino and retweeted by Trump.

"Linkin Park did not and does not endorse Trump, nor authorize his organization to use any of our music," a Saturday tweet from the band's official Twitter reads. "A cease and desist has been issued."

Health and education leaders are trying to determine how to reopen while still abiding by COVID-19 safety guidelines.

The video has now been disabled on Twitter "in response to a report by the copyright owner," a notice from the site says, replacing the video.

The version of the song used in the video was a cover, performed by Tommee Profitt featuring Fleurie and Jung Youth, Variety reports.

On Saturday, Youth tweeted in response.

"Earlier today I found out that Trump illegally used a cover song that I am part of in a propaganda video which he tweeted," he tweeted. "Anyone who knows me knows I stand firmly against bigotry and racism. Much love to everyone in the twitter community who helped get the video taken down fr!!"

"I repeat..... Trump is a greater threat to the USA than terrorism!!" wrote Bennington on Twitter in 2017. "We have to take back our voices and stand for what we believe in."

Other artists to condemn the use of their music by the Trump administration and campaign teams include Neil Young, Tom Petty (via his estate), The Rolling Stones, Elton John and Adele.