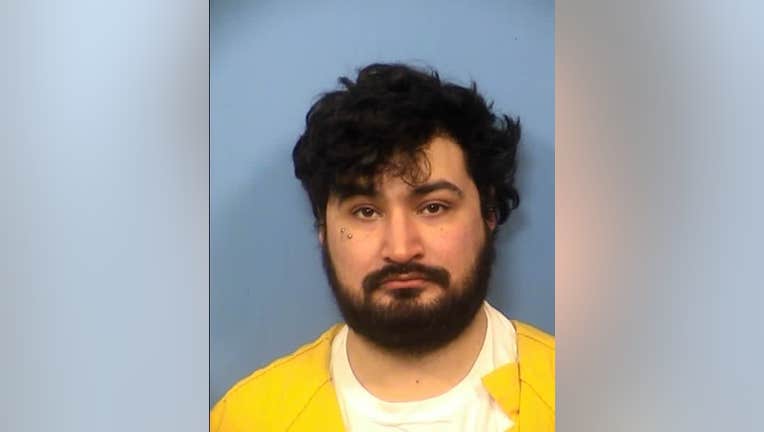 LOMBARD, Ill. - A Lombard man has been sentenced to 10 years in the Illinois Department of Corrections for conspiracy to commit terrorism.

Christian Frazee, 27, of Lombard, entered a plea of guilty to one count of conspiracy to commit terrorism.

Additionally, Frazee plead guilty to one count of possession of child pornography. He was sentenced to an additional three years to be served concurrently.

At about 12:27 a.m. on June 1, 20202, a Lombard police officer noticed a man dressed in all black wearing a hood, face covering and latex gloves walking near the Village Hall, and then in the direction of the Village of Lombard Municipal campus with a bat hanging from his bag, prosecutors said.

The man, later identified as Frazee, was walking in the direction of the squad cars and employee vehicles holding a lighter in his left hand and a Molotov cocktail in his right hand.

Prosecutors said Frazee also had a butane torch lighter and seven additional lighters in his possession.

He was taken into custody at that time and charged with one count of possession of an incendiary device and one count of attempt terrorism.

"In June 2020, amid legitimate protests, Mr. Frazee armed himself with a Molotov cocktail, headed towards the Lombard Village Hall and municipal campus intent on terrorizing the community through violence," said DuPage County State’s Attorney Robert Berlin. "If not for the vigilance and quick actions of the Lombard Police Department, the situation may have escalated resulting in the loss of property and perhaps the loss of human life."

While investigating, authorities found hundreds of images and videos of child pornography on Frazee's phone.

Frazee will also be required to register as a sex offender for life, prosecutors said.