After 4-year-old Michael was brought to tears when Santa said he couldn’t have a Nerf gun for Christmas, the mall sent another one to his house with a wrapped gift. Sabella DeCarlo via Storyful

Norridge, Ill. - After a young boy’s visit with Santa ended in tears from being told he couldn’t have a toy gun, a mall in Illinois apologized by sending another jolly ol’ Saint Nick to his home with a brand new Nerf gun.

The boy was captured on video posted by his mother, Sabella DeCarlo, at a mall in Norridge, a suburb of Chicago. It shows 4-year-old Michael sitting at a table across from the mall Santa on Dec. 6.

Michael tells the mall Santa he would like a Nerf gun, and the Santa replies saying, “No, no guns.”

DeCarlo told Storyful she thought maybe the Santa did not hear her son correctly, so she chimes in to clarify, “Nerf gun.”

The Santa responds, “no, not even a Nerf gun,” adding, “if your dad wants to get it for you, that’s fine. But I can’t bring it to you.”

Santa’s comments prompted the child to turn to his mom and burst into tears. Video of the interaction went viral, garnering hundreds of comments criticizing Kris Kringle and offering to send the boy the toy gun he asked for.

In an effort to “make it right,” the Harlem Irving Plaza sent another mall Santa to the boy’s home the next day. A second video, posted to Facebook by the boy’s grandmother, shows Michael surprised to find Santa at his door. 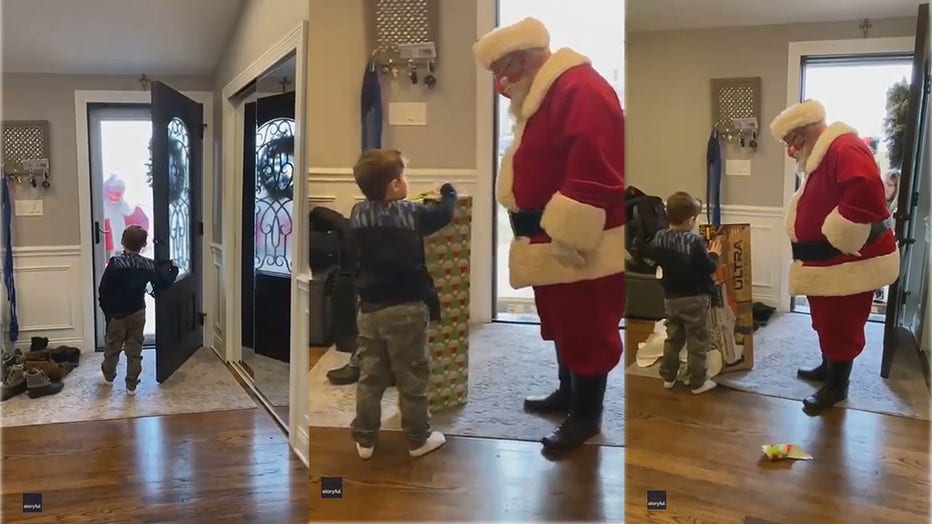 The Santa can be heard telling Michael, “So there was a mistake made yesterday? Well, we’re so sorry about that, okay?”

The Santa then asks to come in and presents the boy with a gift that comes up to his chin. Michael begins to open the wrapped present, a Nerf gun, and exclaims, “This is crazy, this thing!”

DeCarlo edited her original Facebook post showing the initial incident to say that the mall had responded quickly with “kindness and understanding.”

“We thought it was very kind and we’re grateful for their quick response to restore my son’s faith in Santa,” DeCarlo said.

She added in a follow-up Facebook post that the situation had “turned into something magical for boys and girls who may be wishing for toys, especially Nerf guns.” DeCarlo said the family aims to pass out any toys they receive to children who are less fortunate.

RELATED: Santa Claus to use plexiglass, face masks at malls across US as COVID-19 cases surge