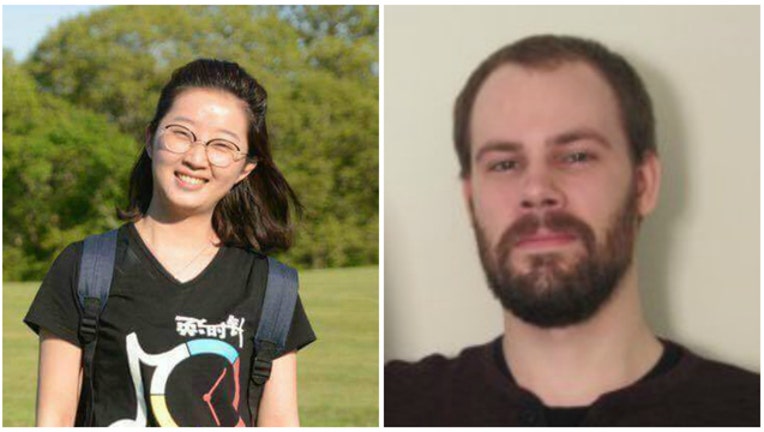 CHICAGO (AP) - A former University of Illinois graduate student is set to stand trial in the 2017 disappearance and suspected killing of a visiting scholar from China -- a case in which the death penalty is possible and that has been closely watched in the home country of the victim, whose body hasn't been found.

Jury selection in the federal trial of Brendt Christensen begins Monday in Peoria, a central Illinois city about 85 miles (135 kilometers) northwest of Champaign, where 26-year-old Yingying Zhang was studying at the university's flagship campus and where she was last seen.

Because it's a death penalty case, jury selection is expected to take a week, as among the questions prospective jurors will be asked is whether they oppose capital punishment. If Christensen, 29, is convicted, jurors would decide whether they think he should be executed.

Zhang went missing on June 9, 2017, as she was running late to sign a lease for an off-campus apartment in Urbana, which is next to Champaign and about 140 miles (225 kilometers) southwest of Chicago. She had just missed a bus when Christensen tricked or forced her into his car, prosecutors say. Christensen told the FBI he dropped Zhang off after a few blocks.

Christensen, who earned a master's degree in physics at the university, was arrested that June 30 -- his birthday -- and was later charged with kidnapping resulting in death. Christensen has pleaded not guilty.

In court filings a week before the trial, prosecutors indicated that among the evidence they want to show jurors is carpet with an apparent blood stain from Christensen's bedroom, a baseball bat that was in the bedroom and a copy of the novel "American Psycho" that they say Christensen gave to an acquaintance.

Prosecutors also want to introduce a journal that Zhang kept in Illinois. Her parents told The Associated Press in 2017 that her last entry was: "Life is too short to be ordinary."

A star prosecution witness will be Christensen's ex-girlfriend, who secretly recorded him for the FBI before his arrest.

Complicating the task of prosecutors is that Zhang's body hasn't been found. They'll point to Zhang's blood in Christensen's apartment and that a cadaver-sniffing dog indicated a dead body had been there as proof that she's dead.

Zhang's mother said in 2017 that not having Yingying's body added to the pain.

"I want to ask the mother of the suspect, please talk to her son and ask him what he did to my daughter," she said. "Where is she now? I want to know the answer."

U.S. District Judge James Shadid said during a Thursday pre-trial hearing that 12 jurors and six alternates will be selected from an initial jury pool of more than 400. Seventy potential jurors will be chosen during the week, and the defense and prosecution can each dismiss any 20 without giving a reason. Others can be dismissed for cause if Shadid agrees.

Zhang, described as conscientious and fun-loving by friends, got her master's in environmental engineering in China. The daughter of a part-time truck driver later used her meager savings to buy her family a cellphone, air conditioner and microwave oven, the family has said.

Zhang's father, mother and brother flew in from China for the trial, which they will watch remotely via closed-circuit video in a courtroom in Champaign.