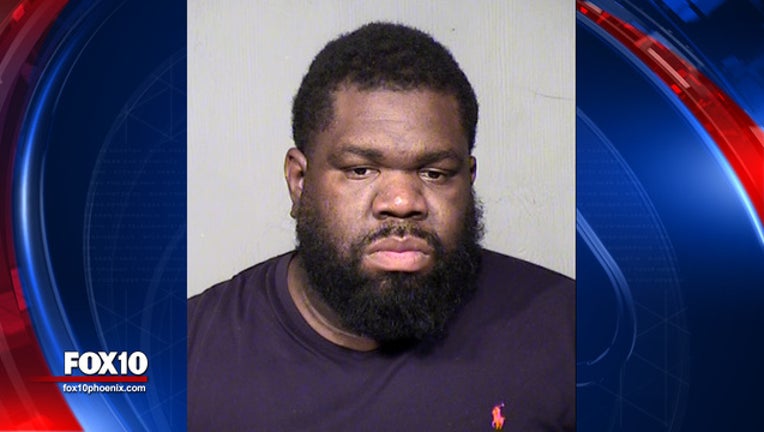 Isiah Jackson, 37, was arrested after police say he shot his teenage stepdaughter because she didn't finish her chores. Read more.

SURPRISE, Ariz. (FOX 10) - Police say they have arrested a man they suspect of aggravated assault and child abuse involving his teenage stepdaughter.

During the investigation, detectives learned 37-year-old Isiah Jackson was shooting birds from the home's roof near 136th Ave. and Watson Lane on April 30. He brought the long barrel pellet gun back into the house to fix the scope and spoke to the victim about her chores, which were not finished. Jackson opened the gun and closed it with the barrel pointed at the girl when it went off.

The 13-year-old girl was shot in the chest at close range. She was transported to an area hospital and underwent emergency surgery for a pellet wound near her heart. The girl is now listed in stable condition.

During the event, police say Jackson was unable to find his phone and asked his brother-in-law to call 911.

In the report, the officer stated, "While on 911, Isiah left the victim and went upstairs to find his phone. I could hear dispatch advising Isiah he needed to be with the victim to conduct CPR for it to work, Isiah made the statement he was upstairs."

When fire department crews arrived at the scene, they had to cut the girl's clothing. A hot dog was found in her pants. In the report, the officer stated, "When questioned about it, the victim advised to a nurse and a social worker she was shot on purpose by her father for eating food."

Per court records, the girl stated Jackson caught her eating something she should not have and told her to hold up a shooting target. "Right before shooting the pellet gun, Isaiah advised the victim next time, he would Tase her."

During an interview, police say Jackson would not admit to shooting the victim on purpose. He also claimed that the girl steals food and eats out of the trash. Jackson admitted to bringing targets inside the home but wasn't able to tell detectives where they were located.

Back at the house, the girl's mother arrived and police say she refused to speak with officers and packed a suitcase. She left the residence with three younger children. Several hours after the incident, she arrived at the hospital without the children.

The court records say the family has a history of child abuse reports. Later that day, the children were located and placed in the Office of Child Welfare Investigations' custody.

Police officers reported the 13-year-old girl slept in a room by herself under deplorable conditions.