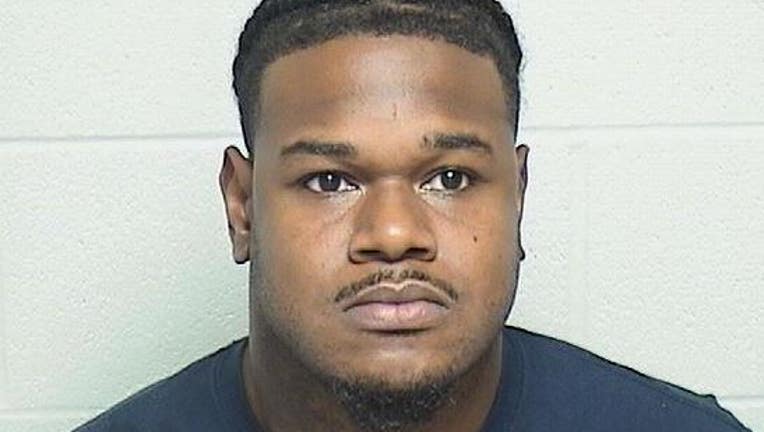 LAKE COUNTY, Ill. - A 29-year-old man has been charged after attempting to escape from the Lake County Courthouse and Lake County Jail as well as elbowing a Highland Park Sergeant in the head, authorities announced Thursday.

At about 1:45 p.m. Wednesday, Cauley was attending a court hearing in the Lake County Criminal Courthouse Tower regarding a previous arrest for aggravated battery to a peace officer.

Cauley was out on bail, but had a court case management hearing, authorities said.

During the hearing, a judge ordered Cauley to be remanded back into custody for violating the conditions of his bail.

When Cauley learned this information, he fled out of the courtroom, authorities said.

A Lake County Sheriff’s Court Security Officer and a Highland Park Police Sergeant, who was in the same courtroom for another matter, pursued Cauley on foot.

Cauley fled into the foyer outside of the courtroom. He turned a corner in the hallway and ran directly at the Highland Park Sergeant, elbowing the sergeant in the head, authorities said.

Cauley was eventually taken into custody by court security officers and the sergeant.

Cauley was taken to an area hospital as a precaution due to a medical issue he developed after being taken into custody, authorities said.

The Highland Park Sergeant was also taken to an area hospital due to a head injury he sustained when he was elbowed by Cauley.

Cauley was treated and released from the hospital and transported to the Lake County Jail.

After arriving at the jail, Cauley attempted to escape from custody again.

He tried to flee out of a door that was opened so correctional officers could move another inmate. The door did not lead to the outside of the jail, authorities noted.

Officers subdued Cauley before he reached another secure door.

"This is an example of the unpredictability nature of what our staff encounter on a daily basis.  Battering a police officer is unacceptable, plain and simple.," said Sheriff John D. Idleburg. "I am thankful the Highland Park Sergeant was not seriously injured and thankful my staff was not injured."

The judge who initially remanded Cauley into custody set no-bail on the remand, authorities said.

Cauley was due in court Thursday on his new charges.