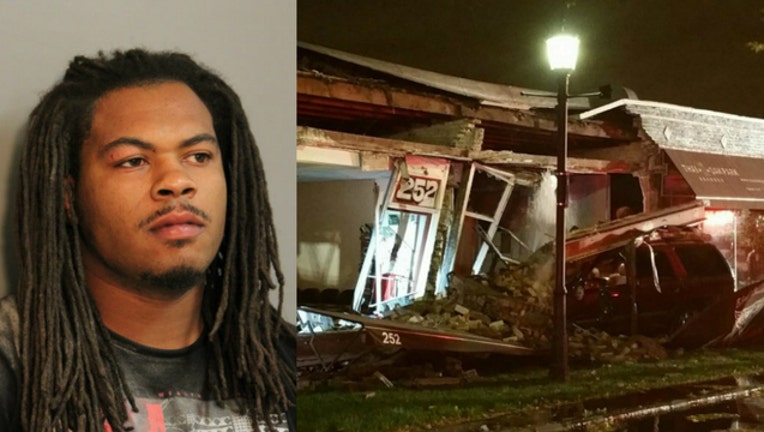 OAK PARK (Sun-Times Media Wire) - A West Side man has been charged with DUI after allegedly crashing an SUV into a tattoo parlor and a barbershop early Thursday in west suburban Oak Park.

Larell Jackson, 25, was driving a 2002 GMC Yukon west about 2:15 a.m. when it left the road in the 200 block of Chicago Avenue, according to a statement from Oak Park police. Three passengers were inside the SUV with him.

The Yukon then hit a light pole before slamming into the two storefronts, police said. The crash “damaged the support structure and caused the brick facade to collapse onto the vehicle.”

Extensive damage could be seen to the fronts of Blind Creations tattoo parlor, 250 1/2 Chicago Ave., and Barber’s Gallery barbershop, 252 Chicago Ave. Police said all utilities were shut off and village officials were assessing the buildings’ structural integrity.

One of the passengers in the Yukon was taken to Loyola University Medical Center in Maywood with injuries that were not thought to be life threatening, police said. Jackson and the other two passengers refused medical treatment.

Jackson was taken into custody and charged with driving under the influence, failure to reduce speed to avoid an accident, driving on the sidewalk and operating an uninsured motor vehicle, police said. He lives in the West Garfield Park neighborhood on Chicago’s West Side.