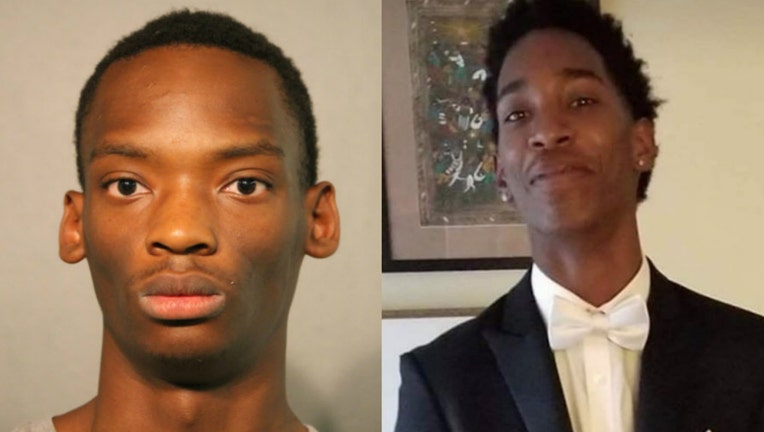 CHICAGO - An 18-year-old man faces a weapons charge — but not murder — in the fatal shooting of another man Tuesday inside a CTA station in Rogers Park.

Michael Jackson, of Rogers Park, is charged with a felony count of unauthorized use of a loaded weapon in connection to the mid-day shooting at the Howard Street CTA station, Chicago police said Thursday.

Although Jackson was arrested within minutes of the slaying of 21-year-old Macksantino Webb, and was charged in connection to the same incident, police did not charge Jackson with Webb’s murder, according to a department spokesman.

Before Webb was fatally shot, he had moved in with a great uncle in Rogers Park to escape gun violence near his home in Englewood.

That uncle — Rev. Zollie Webb of Friendship Baptist Church in Evanston — said Thursday he was “hurting” and needed to tell “our young people … that it is important they stop the violence.”

“How many times do we have to walk behind caskets of young black men before they realize that’s their deaths are a waste of talent and energy?” Zollie Webb wrote on Facebook.

Authorities say Macksantino Webb was inside the Howard CTA Red Line station about 12:20 p.m. Tuesday when someone approached him and fired shots.

Struck in the neck and chest, he went to the train platform, where paramedics tried to revive him. He died later at St. Francis Hospital in Evanston.

“My nephew was only 21 and had a 2-month-old baby girl that will never really know her father,” Zollie Webb wrote. “I am hurting to help plan his funeral and preach his final service and eulogy.”

Webb couldn’t be reached for comment this week. In a 2016 profile, Webb told the Sun-Times he began housing Macksantino and his brother over the summer after they witnessed the fatal shooting of their older cousin.

“Their mothers are hard-working single moms. Get them out of their neighborhoods — that was the goal,” Zollie Webb said at the time.

Their families rented an apartment for the teens, and Webb got a second apartment in his building. Macksantino got his first job with Bucktown Maid Service, which was owned by another relative.

But even then, they couldn’t completely escape.

“Their cousin, Ernest, came and made himself at home this summer,” Webb said then. “He would often do the chores the other two were supposed to do, and he helped me barbecue on the Fourth of July. A couple weeks later, he was shot and killed in Englewood.”

Macksantino Webb had gone home that weekend because he missed his friends — and saw the shooting.

“Somebody just got to shooting out of nowhere,” she said then. “We’re taking cover under some bricks. Police came, like, 10 seconds later. Ernest had been shot in the head.

“I didn’t know what to do. We were together since grammar school. We used to always be at his house every day after school.”

That wasn’t the first time the brothers had been shot at. On Super Bowl Sunday, they were hanging out with friends and family when someone walked up and started shooting. At least four people were hit, including a cousin.

Following Tuesday’s shooting, police arrested two people but released one soon after. No one has been charged.

Jackson is due for a bail hearing tomorrow, police said.