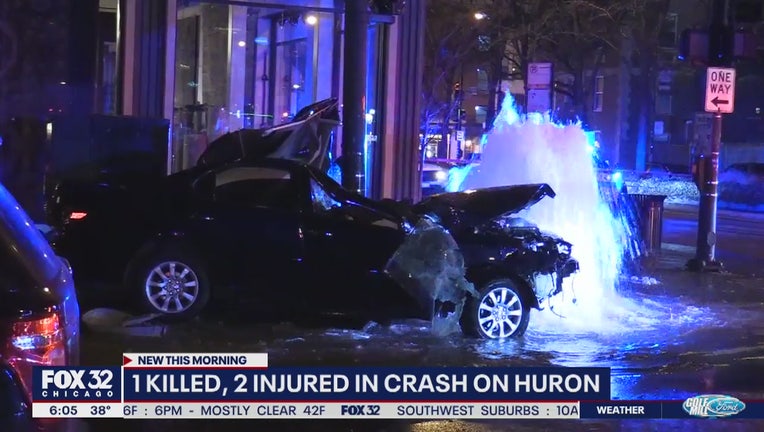 CHICAGO - A man was killed and two other people, including a Chicago police officer, were injured  after a vehicle hit a pole and a fire hydrant while fleeing police Monday in River North.

A blue Lexus was involved in a crash with another vehicle about 1:45 a.m. near Ohio and Wells streets, according to Chicago police. When the female driver got out of the other vehicle, the 26-year-old man driving the Lexus told her he had a gun and took off.

Police dispatchers broadcast a description of the Lexus and officers eventually spotted it and began a pursuit, police said.

They called off the chase before the Lexus crashed into the pole and hydrant about 2:30 a.m. in the 700 block of North LaSalle Boulevard, according to police and Chicago Fire Department officials. The crash caused water from the hydrant to pour into the road near LaSalle and Huron Street.

Damond M. Smith, who was driving the Lexus was pronounced dead at the hospital, police and the Cook County medical examiner’s office said. He lived in Tinley Park.

A woman who was a passenger in the Lexus was listed in good condition, police said.

A Chicago police officer was not involved in the crash but suffered a minor injury at the scene, according to police. The officer was also listed in good condition.

No injuries were reported in the initial crash, police said. The CPD Major Accidents unit is investigating.