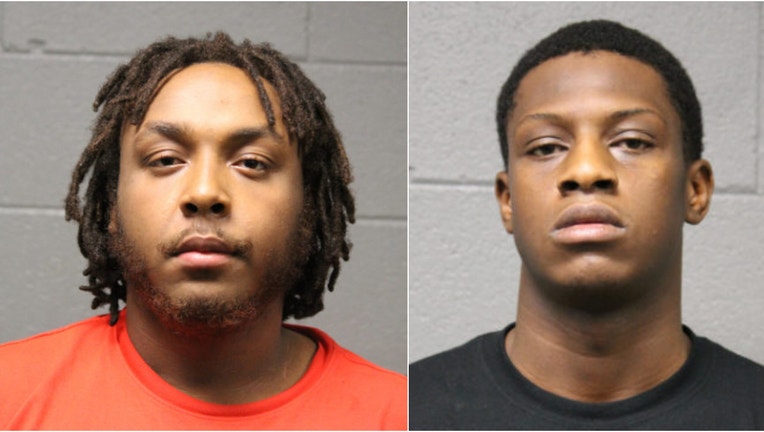 CHICAGO - Two men were ordered held on $200,000 bail Wednesday in connection to a midday Loop shootout that broke out when one of the men, who was holding a baby, was shot at as he stood outside the Congress Hotel.

Davarius Minor handed off the infant to someone else before pulling out a pistol with an extended magazine Tuesday, firing nine shots in self-defense at his attacker at Michigan Avenue and Harrison Street, Cook County prosecutors said.

No one was shot in the exchange that was witnessed by Chicago police officers patrolling nearby, Assistant State’s Attorney James Murphy said.

After the shots were fired, Minor and two others got into a vehicle, driven by Daquan Dunn, leading officers on a high-speed chase through the South Loop, Murphy said.

Dunn reached a speed of 80 mph and disobeyed several traffic signals during the pursuit, Murphy said. Officers, meanwhile, attempted to stop Dunn by pointing their weapons at the car, Murphy said.

Dunn eventually crashed the car into three other cars stopped at a red light at Roosevelt Road and the Kennedy Expressway. Minor and Dunn were arrested after a foot chase, Murphy said. A bystander in one of the other cars was injured and taken to a hospital, police said.

Surveillance video shows a man firing two shots at Minor from the street, Murphy said. Minor allegedly claimed he recognized the gunman as someone who pulled a weapon on him the previous night.

Davarius Minor, 21, is charged with felony counts of aggravated unlawful use of a weapon without a FOID card and aggravated discharge of a firearm at an occupied building, according to Chicago police.

The father of the 11-month-old was initially charged with discharging a firearm, but that charge was dropped after investigators determined he fired shots in self-defense, Murphy said.