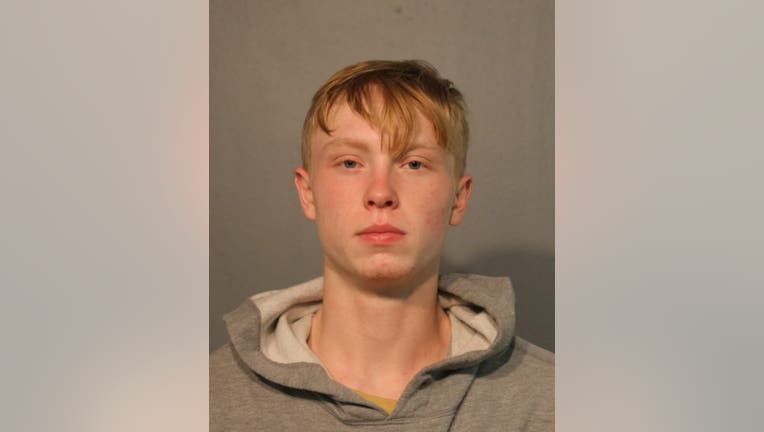 CHICAGO - A 20-year-old man has been charged with igniting a couch in a Logan Square intersection early Thursday after protesters in the neighborhood decried the lack of charges in the fatal shooting of Breonna Taylor by police.

Surveillance video allegedly shows Gavin J. Palm, of Albany Park, burning a couch shortly after midnight at an intersection in the 1900 block of North Western Avenue, according to statement from Chicago police.

As officers confronted Palm, he ran away and dropped a backpack, which allegedly held a torch lighter and an illegal amount of drugs, police said.

Officers chased him on foot and found him hiding under a chair in a backyard in the 2400 block of West McLean Avenue, police spokeswoman Kellie Bartoli said.

Protests over the killing of Breonna Taylor in Kentucky erupted in Chicago Wednesday night.

He was arrested and charged with two felony counts of possession of a controlled substance, and a misdemeanor count of reckless conduct for endangering the safety of motorists and pedestrians in a roadway, Bartoli said.

The charges against Palm were the only protest-related of the night, Bartoli said. Police received no reports of looting or burglary overnight connected to the protests.

Earlier Wednesday, several hundred people converged on nearby Palmer Square and Wicker Park to protest the lack of charges against the officers who fatally shot Taylor in March. Other protests were organized in Millennium Park and Auburn Gresham.

A group of just a couple dozen protesters quickly grew to more than one-hundred outside Chicago Police Headquarters on Wednesday.

In anticipation of civil unrest, Gov. J.B. Pritzker sent in the Illinois National Guard, which could be seen Wednesday patrolling streets. The city also deployed hundreds of city trucks a barriers to commercial corridors and the Chicago Police Department headquarters, the site of another protest that evening.

Wednesday afternoon, a Kentucky grand jury brought no charges against Louisville police for the killing of Taylor during a drug raid gone wrong. Prosecutors said two officers who fired their weapons at the Black woman were justified in using force to protect themselves after they were shot at.