A man almost got crushed underneath an SUV he was working on when the vehicle suddenly started rolling down the driveway. (Credit: Jukin Media)

ANCHORAGE, Alaska - That was a close one: A man who was working underneath his Jeep Cherokee was almost run over when the vehicle suddenly started rolling down the driveway.

Video captured on May 11 shows David Hancock diligently working underneath his red Jeep in his driveway in Anchorage, Alaska. After a few minutes pass, the Jeep suddenly starts to roll down the driveway toward the road. 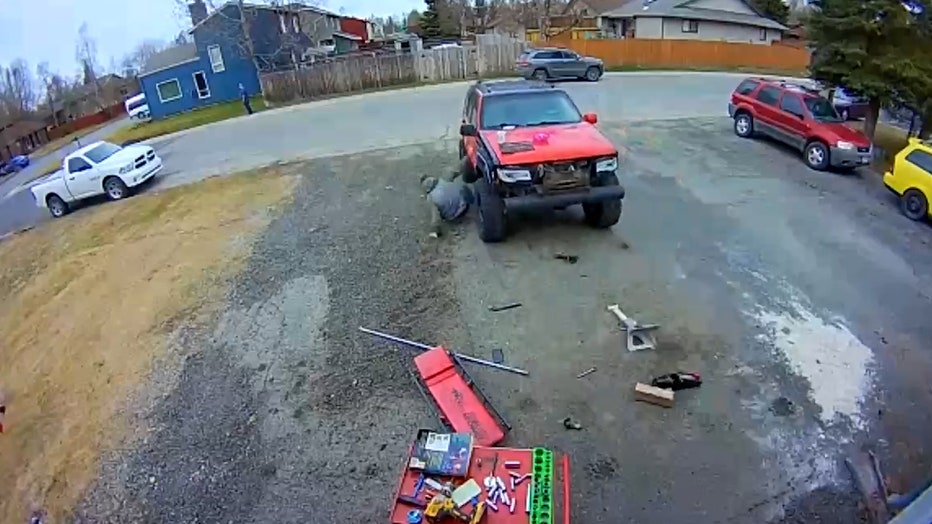 Freeze frame of man narrowly escaping from underneath a runaway Jeep. (Jukin Media)

Hancock told FOX Television Stations that his four-wheel drive was not working properly and while he was underneath the car, he had disconnected the rear driveshaft, which is what caused the car to start rolling down the driveway.

In the footage, Hancock is seen quickly scooting along with the vehicle to avoid getting completely run over and manages to get out from underneath the car as the front left wheel rolls over his leg.

Hancock stands up, seemingly unharmed, and proceeds to retrieve the car.

"I got some bone bruising on my ankle and I had my steel-toed boots on for work, so those saved me," Hancock said.