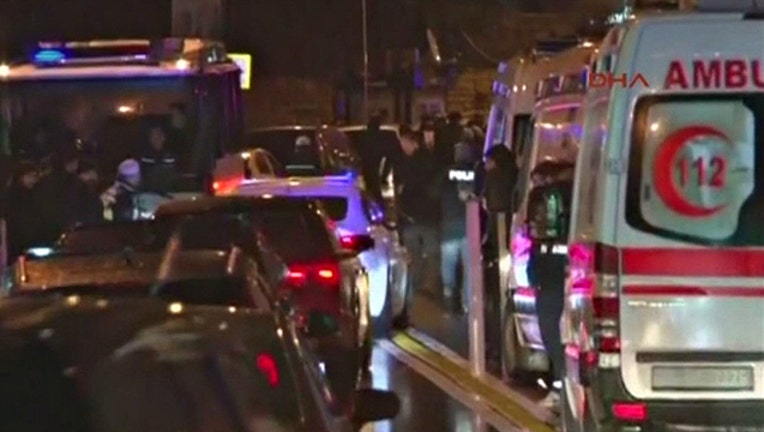 ISTANBUL (AP) — A manhunt is on in Turkey for an assailant in a Santa Claus hat who unleashed a salvo of bullets in a crowded Istanbul nightclub during New Year's celebrations Sunday, killing at least 39 people.

Foreigners were among the fatalities, including an 18-year-old Israeli woman and a Belgian national, according to the two countries' respective foreign ministries. Close to 70 others were injured in what authorities described as a terror attack.

President Recep Tayyip Erdogan vehemently condemned "the terror attack in Istanbul's Ortakoy neighborhood in the first hours of 2017" and offered condolences for those who lost their lives, including "foreign guests."

The attacker, armed with a long-barreled weapon, killed a policeman and a civilian outside Istanbul's popular Reina club at around 1:15 a.m. before entering and firing on people partying inside, Gov. Vasip Sahin said.

"Unfortunately (he) rained bullets in a very cruel and merciless way on innocent people who were there to celebrate New Year's and have fun," Sahin told reporters.

There was no immediate claim of responsibility for the attack and authorities did not name any suspects. The bloodiest attacks that Turkey endured in 2016 were the work of the Islamic State group or Kurdish militants.

Turkey is a member of NATO and a partner in the U.S.-led coalition against the Islamic State group. The country is also facing renewed conflict with Kurdish rebels in the southeast, and across the border in Syria and Iraq.

Interior Minister Suleyman Soylu said the attacker has not been identified and is still at large. "Our security forces have started the necessary operations. God willing he will be caught in a short period of time," he said.

Private NTV news channel said the assailant entered the upscale nightclub, on the shores of the Bosporus, on the European side of the city, dressed in a Santa Claus outfit. The minister said the lone attacker was believed to have left the club wearing different clothing.

Security camera footage obtained by AP from Haberturk newspaper, shows the male assailant dressed in black and carrying a backpack as he shoots down a police officer outside the Reina nightclub.

Footage taken by a different camera shows him inside the venue wearing different clothes and a Santa Claus hat.

At least 15 of the dead were foreign nationals, according to Turkey's interior minister. Five of the victims were identified as Turkish nationals while authorities were still trying to identify the rest.

At least 69 people were being treated in hospitals, four in serious condition, Soylu said, describing the attack as a "massacre, a truly inhumane savagery." He said three or four of the Turkish victims may have been employees at the nightclub,

Some customers reportedly jumped into the waters of the Bosporus to escape the attack.

Mehmet Dag, 22, was passing by the club and saw the suspect shoot at a police officer and a bystander. He said the suspect then targeted security, gunning them down and entering the club. "Once he went in, we don't know what happened. There were gun sounds, and after two minutes the sound of an explosion."

The nightclub area remained sealed off on Sunday morning.

Heavily armed police blocked the snowy street in front of the nightclub where the entrance was covered with blue plastic sheeting below a Turkish flag. Police patrolled the Asian side of the Bosporus on the other side of the club.

Crime scene investigators were seen inside the club searching through piles of mingled chairs, tables and pieces of clothing left behind during the panic among the guests.

And there were emotional scenes in front of a city morgue where those shot dead were brought for identification. Some relatives cried out and fell to the ground as they apparently learned the fate of their loved ones.

Major attacks carried out by IS or Kurdish militants killed more than 180 people in Istanbul and Ankara alone in 2016.

On Dec. 10, a double bomb attack outside a soccer stadium near the Reina nightclub killed 45 people and wounded some 150 others. The attack was claimed by Turkey-based Kurdish militant group, the Kurdish Freedom Falcons.

"Turkey continues its combat against terror and is absolutely determined to do whatever is necessary in the region to ensure its citizens safety and peace," said President Erdogan in a written statement Sunday.

The nightclub attack drew quick condemnation from the West and Russia.

Russian President Vladimir Putin sent his Turkish counterpart a a telegram of condolences, saying "it is hard to imagine a more cynical crime than killing innocent people during New Year celebrations."

The White House condemned what it called a "horrific terrorist attack" and offered U.S. help to Turkey.

An estimated 600 people were celebrating inside the club that is often frequented by famous locals, including singers, actors and sports stars. Several shocked revelers were seen fleeing the scene after the attack and the music fell silent.

The prime minister's office issued a media blackout on the events and asked media to refrain from broadcasting and publishing anything that may cause "fear in the public, panic and disorder and which may serve the aims of terrorist organizations."

Security measures had been heightened in major Turkish cities, with police barring traffic leading up to key squares in Istanbul and the capital Ankara. In Istanbul, 17,000 police officers were put on duty, some disguised as Santa Claus and others as street vendors, Turkey's Anadolu news agency reported.

This story has been corrected to give the death toll from the stadium attack as 45, instead of 44.