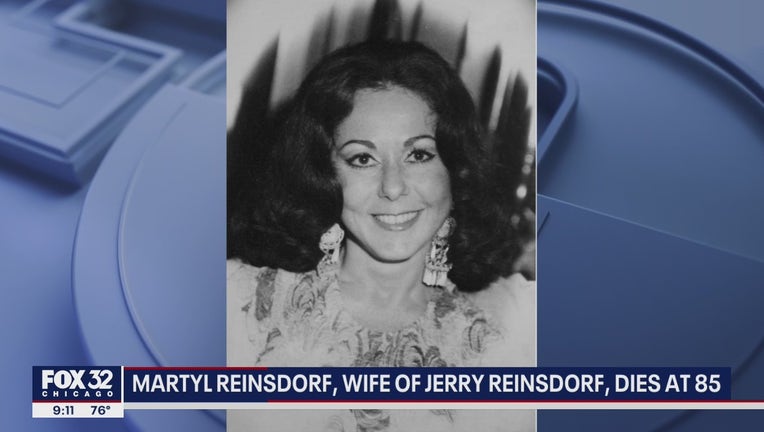 Reinsdorf's family says she died at her home in Paradise Valley, Arizona.

A creator of Cloisonné jewelry, Martyl Reinsdorf designed five of the Bulls’ six NBA championship rings, as well as the White Sox’s 2005 World Series ring. Known as "Grandma Martyl," she also created and distributed more than one-million coloring books, crayons, markers and toys to hospitals, orphanages and shelters around the world.

"My mother had such a heart for children," son Michael Reinsdorf, the Bulls’ president, said in a statement. "The joy she brought through her coloring books made me so proud to be her son. As a father, I loved seeing her being such an involved grandmother with my children. They had so many shared interests and spent time together developing computer programs, creating costumes and starting her coloring book program. These are memories that we all treasure as a family."

Reinsdorf received the 2004 Clarence Troyer Volunteer of the Year Award, and she was recognized in 2011 by American Friends of Hebrew University with the Torch of Learning Award.

Born in 1936, Reinsdorf’s family moved to Chicago in 1944. She attended Sutherland Elementary School and Morgan Park High School before attending George Washington University, where she met and married Jerry Reinsdorf in 1956.

She went on to work at the Pentagon and, after the couple moved to Chicago, for the Department of Agriculture.

Besides Jerry and Michael, Martyl Reinsdorf is survived by son Jonathan and daughter Susan Reinsdorf, as well as nine grandchildren.

Services will be private. The family has requested that any donations be directed to The Spectrios Institute for Low Vision at spectrios.org.