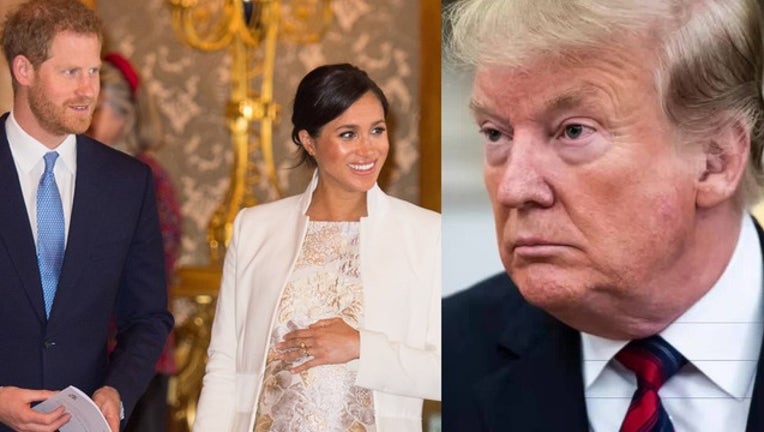 A schedule for the Trumps' state visit to the U.K. has been released, indicating that the former "Suits" actress (and prior Hillary Clinton supporter) won't attend.

Queen Elizabeth II will host the Trumps at Buckingham Palace on Monday, June 3, with Prince Charles and Camilla, Duchess of Cornwall, among those in attendance.

The Trumps will then dine with the Queen in a private lunch and artifacts viewing, followed by a tour of Westminster Abbey and a visit to the Grave of the Unknown Warrior with Prince Andrew. Prince Charles and Camilla will then have tea with the Trumps at Clarence House, with the evening concluding with a state banquet at Buckingham Palace, where President Trump and Queen Elizabeth II will each deliver speeches.

It may be an uncomfortable meeting for Prince Harry, as friend Selina Scott told Express that President Trump once pursued Harry's late mother, Princess Diana.

“He bombarded Diana with massive bouquets of flowers," Scott alleged. "She became increasingly concerned. It had begun to feel as if Trump was stalking her.”

On Tuesday, June 4, President Trump will have meetings with newly-resigned Prime Minister Theresa May.

On Wednesday, June 5, the Trumps, Queen Elizabeth II and Prince Charles will attend a celebration of the 75th anniversary of the D-Day landings.

Before going public with her relationship with Prince Harry, Duchess Meghan called Trump "misogynistic ... and so vocal about it," adding, “I’m voting for Hillary Clinton, not because she is a woman, but because Trump has made it easy to see that you don’t really want that kind of world that he’s painting.”