Two people have been charged in connection with the killing of 8-year-old Melissa Ortega who was fatally shot Saturday in Little Village.

CHICAGO - Two people have been charged in connection with the killing of 8-year-old Melissa Ortega who was fatally shot Saturday in Little Village.

Police arrested the suspected gunman, a 16-year-old boy, and the alleged getaway driver at the time of the shooting, a 27-year-old man.

"Our city has been shaken, and no one can make sense of this tragedy," said Chicago Police Supt. David Brown at a news conference Wednesday afternoon. "This morning, I spoke with Melissa's mother, in her home, not only to check in on her during this especially tough time, but to also let her know we found the offenders responsible for taking Melissa's life."

At the same news conference, Melissa's mother issued an emotional statement regarding the charges filed in her daughter's murder, and spoke directly to the gunman.

"We came in search of the American dream we so famously hear of, but instead I get to live a nightmare for the rest of my life," said Melissa's mother. 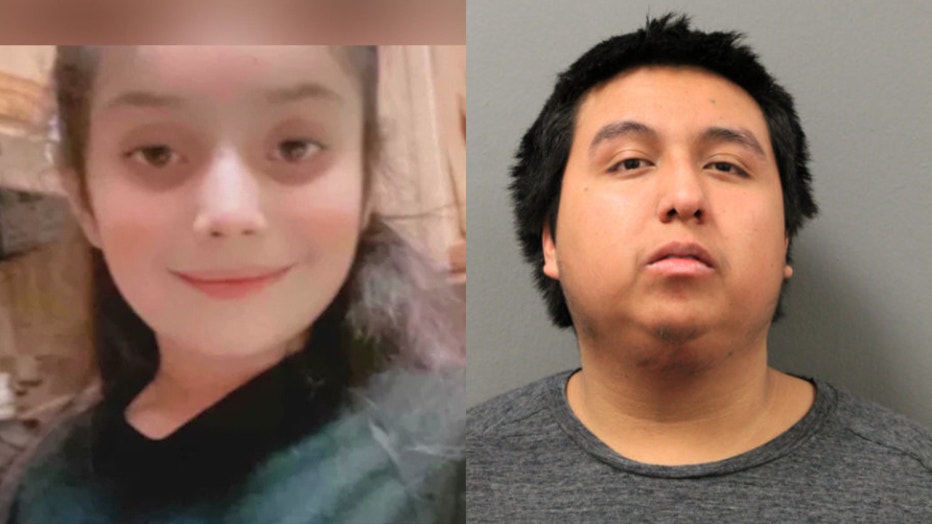 Guzman was taken into custody Monday after homicide investigators pulled over a Toyota Camry believed to have been used in Saturday’s shooting on 26th Street near Pulaski Road.

The suspect was behind the wheel and a loaded gun was found in the driver’s side door, according to a police report.

Chicago police said the gun recovered matched the casings and fired bullets at the scene.

The juvenile was taken into custody Tuesday.

"To the aggressor, I forgive you. You were a victim too. As a 16-year-old, the community failed you, just like it failed my precious baby," said Melissa's mother.

The mother of 8-year-old Melissa Ortega issued an emotional statement Wednesday, speaking directly to the gunman who killed her daughter.

Melissa was walking with her mother on Saturday in Little Village when a gunman emerged from a nearby alley and opened fire, unleashing a hail of bullets that fatally struck the 8-year-old girl twice in the head and wounded a gang member who was the intended target, a police report shows.

When the shots rang out, Melissa’s mother recalled running toward a bank when she felt her daughter "go limp," according to the report. That’s when she realized Melissa had been shot twice in the right side of her head.

After officers responded to a ShotSpotter alert and found Melissa at the corner of 26th and Pulaski, paramedics responded and brought her to Stroger Hospital, where she was pronounced dead less than two hours later, according to the report and an official statement from Chicago police.

Two people have been charged in connection with the killing of 8-year-old Melissa Ortega who was fatally shot Saturday in Little Village.

The intended target, a 29-year-old man, who has been arrested 13 times and convicted of two felonies, was struck twice in the back, the report states. He was taken to Mount Sinai Hospital in critical condition, police said.

On Monday, Chicago Police Supt. David Brown the city would "spare no expense" and exhaust every resource to bring Melissa's killer to justice.

Ortega moved to the U.S. from Mexico last August to start a better life with her family and to pursue the American Dream.

Top Chicago police officials on Monday blamed the fatal weekend shooting of an 8-year-old girl in Little Village on a longstanding gang conflict, and said they plan to saturate the neighborhood with officers and investigators to deter retaliatory attacks and build cases against the 'drivers of violence.'