A minivan became submerged in a water-filled hole that opened up along a road in The Villages. A couple was pulled from the vehicle by a passer-by.

THE VILLAGES, Fla. - A couple in Florida had to quickly escape from their minivan Wednesday after it sank into a water-filled hole in the street caused when a water main broke.

Rich and Laurie Harinsky, of The Villages, say they saw the road starting to flood when they were driving there. They said they thought it wouldn't be a problem to drive through it, but they were wrong.

Minivan sinks into hole in The Villages, report says

The video, courtesy of Villages-News.com, shows the vehicle in the hole.

“Going that way,” Rich continued, “we heard a clunk and I said 'Uh oh, we got a problem!' I tried to back it out but it's front-wheel-drive so it wasn't gonna catch anything.” 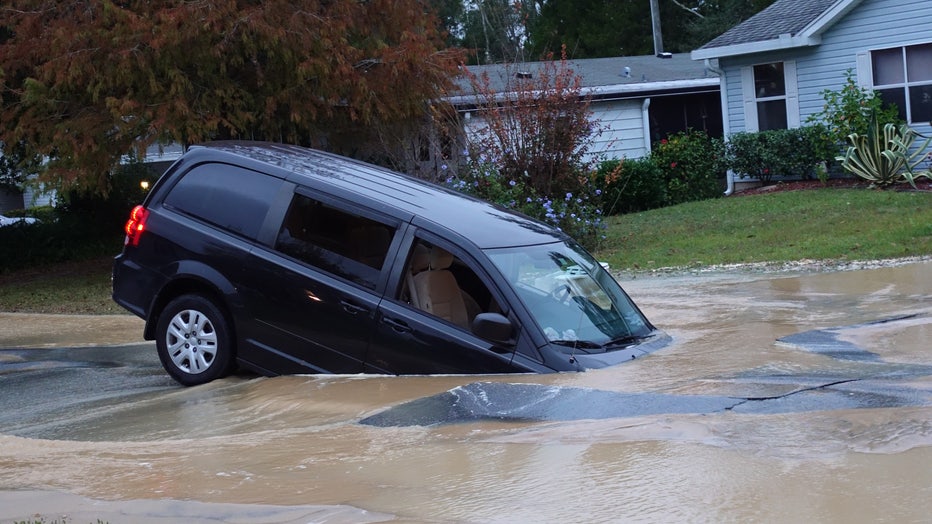 To make things worse, the doors wouldn't open and water began filling the vehicle. “Rich was panicking, and I don't know why, but he wanted to call AAA? And I was like 'Why AAA? Call the police department, will you please!?’” Laurie said.

Laurie said a good Samaritan came to their rescue. “It was like a guardian angel just showed up!”

Lifting open the minivan's rear gate, the man, who said his name was Scott, helped them climb out the back. “Laurie climbed through the van, through two mobility scooters, and the same guy who knocked on the window opened the hatch and got her out, she got the scooters out because of my limited mobility, and I climbed out,” Rich recalled.

After that, they say Scott disappeared. “He helped get us out of the car, he helped bring the stuff to the side of the road, he stayed for a bit, and when I turned around to thank him, he was gone,” Laurie said.

The Villages officials say an 8-inch water main breaking under the street was to blame. While crews hauled the vehicle out, workers shut off the water, later repairing the pipe and street. The Harinskis say insurance will cover the van. They only hope they can thank their rescuer.

Officials say because of the water main break, neighborhood residents should boil their water until further notice.