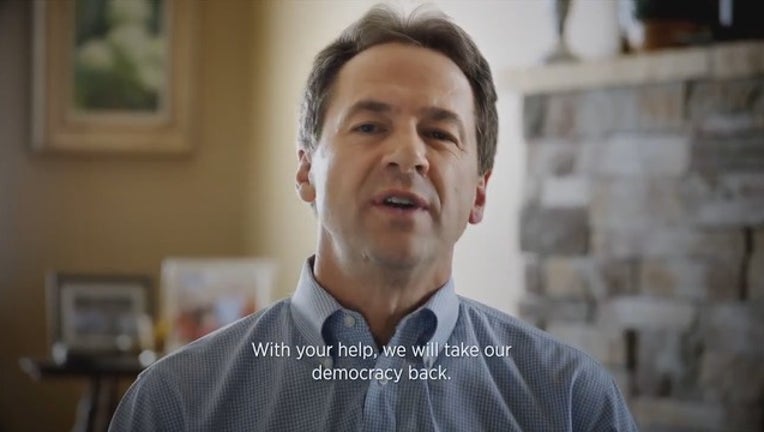 Montana Gov. Steve Bullock announced May 14, 2019 that he is seeking the Democratic presidential nomination.

HELENA, Mont. (AP) - Montana Gov. Steve Bullock announced Tuesday that he is seeking the Democratic presidential nomination, distinguishing himself among nearly two dozen candidates as the field's only statewide elected official to win a state that President Donald Trump carried in 2016.

The 53-year-old governor is running as a centrist Democrat who has advanced party values while navigating a Republican legislature and a GOP-leaning electorate. Bullock made his candidacy official in a video that capped months of speculation fueled by his political activity in Iowa, which hosts the nation's first presidential caucus next February. He plans to address supporters later Tuesday in the state capital, Helena, where he grew up not far from the governor's mansion.

"What we need to do is get the country back on track, make sure everybody has a fair shot at success," he told The Associated Press in an interview before launching his campaign via online video. "I've been able to get meaningful things done that impact the people of my state. I believe there'll be a strong reception for that."

His immediate challenge is corralling enough donors and support in the polls to qualify for the first Democratic debate in June. More broadly, as a white, Trump-state Democrat, Bullock could face an uphill battle to break through in a primary that - at least in its early days - has been defined by former Vice President Joe Biden's dominance and the progressive energy of a diverse party base.

He pitches himself as the rare Democrat who can win over rural and small-town voters - a constituency that helped Trump flip key battleground states in 2016. Bullock has done it three times in Montana, whose largest city boasts a population of 110,000 and where Democrat Hillary Clinton got just 36 percent of the vote against Trump.

"We need somebody who can win back some of these places we lost in '16," Bullock said, adding that "voters want somebody that they believe can win, that will fight for them."

Yet Bullock emphasizes that he governs with mainstream Democratic priorities. He has expanded Medicaid insurance coverage to nearly a tenth of Montana's 1.06 million residents as part of the 2010 Affordable Care Act and embraced marriage equality for same-sex couples. He's used executive orders to extend LGBTQ rights and protect net neutrality, and he's vetoed gun bills backed by the National Rifle Association and measures that would have severely limited abortion access in Montana.

He also has spent years advocating for tighter regulation of money in politics, unsuccessfully challenging the Supreme Court's Citizens United ruling as attorney general and then, as governor, signing a Montana law that requires dark money groups operating in the state to disclose their donors. Last year, he sued the Internal Revenue Service over a Trump administration rule change to stop requiring the disclosure of donor information from certain nonprofit organizations.

He's aligned himself with conservationists, environmental activists and outdoorsmen by prioritizing public land use and conservation - a key issue in many Western states and one that has helped him draw distinctions with some of his Republican opponents. But he's also been at odds with them at times as the leader of an energy-producing state, such as when he criticized the Obama administration for "moving the goalposts" by proposing stringent carbon dioxide emission reductions under the now-defunct Clean Power Plan.

Bullock said he believes his record adds up to progressive results, even if he might not appeal to Democrats' left flank. "The lane that I'll be in is getting stuff done that does make a difference in people's lives," he said. "Is that progressive? Well, being the first state to do something about net neutrality ... is progress. What we've done in health care ... is progressive. I'd put my record on outside spending and dark money against anyone in the field."

His time in office has largely been scandal-free, with the occasional hiccup. Earlier this year, Bullock apologized for not doing enough to warn others about a longtime aide of his who was accused of sexually harassing women while working first for the Democratic Governors Association while Bullock was chairman and later for New York Mayor Bill de Blasio's administration.

Bullock's attendance at a Paul McCartney concert in Missoula in 2014 also opened the door for critics to scrutinize his use of a state plane that resulted in his having to reimburse $7,000 for flights that mixed official business and campaign trips. The state's campaign regulator determined Bullock's 2016 re-election campaign violated state law by failing to make timely expense reports related to use of the plane.

The Montana governor is likely among the final Democrats to join one of the biggest presidential fields in modern memory. De Blasio is expected to announce his decision this week on whether to run for the White House. And Stacey Abrams of Georgia continues to indulge speculation that she could scramble the field with a late launch this summer or fall.

Although he is not a household name, Bullock is well known and well regarded in Democratic circles beyond Montana. Like Inslee, Bullock has served previously as chairman of the Democratic Governors Association. Their roles put both men in front of top party financiers from coast to coast, though Inslee thus far has had trouble parlaying that into a substantial presidential campaign bank account. Bullock currently chairs the bipartisan National Governors Association.

Bullock and his wife, Lisa, also a Montana native, have three children, ages 16, 14 and 12, who attend the same Helena public schools where the governor was educated. Steve Bullock graduated from Claremont McKenna College in California and Columbia Law School in New York. He spent part of his legal career in Montana state government and had stints at law firms in Washington, D.C., and New York, and his own private practice in Helena, before being elected attorney general in 2008. He won the governor's race with 48 percent of the vote in 2012 and was re-elected with 50.2 percent of the vote the same day that Trump won 56.2 percent of presidential ballots.