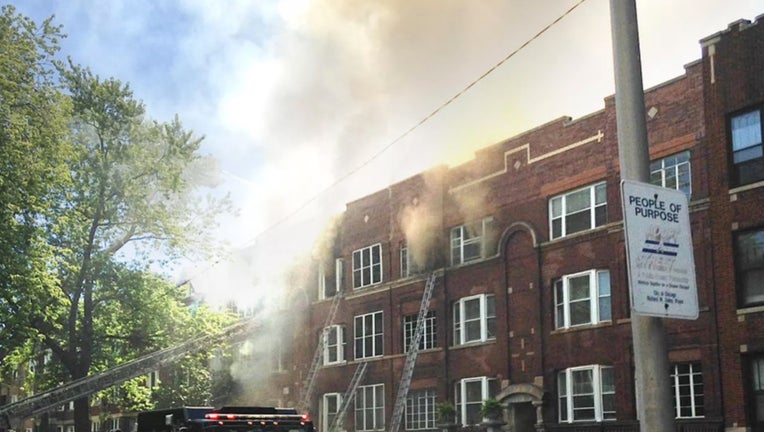 CHICAGO - The mother of a 3-year-old boy killed in a 2018 fire in Grand Crossing has filed a wrongful death lawsuit against the foster mother who had custody of the child at the time.

Shanette Roach filed the suit Tuesday in Cook County Circuit Court, nearly two years to the day after the death of her son, Maqkwone Jones.

The toddler died July 8, 2018, after being left in a burning apartment in the 1400 block of East 67th Place by an adult who escaped and didn’t know the child was there, authorities said at the time.

The two-count suit alleges wrongful death against the boy’s foster mother — both individually and in her capacity as a foster parent for the Illinois Department of Children and Family Services — as well as a man who lived with her.

The woman, who is related to Roach, was given custody of the boy and his three siblings in 2017, according to the suit.

The suit claims DCFS failed to properly screen the backgrounds of the foster mother’s roommates or properly investigate reports of drug use in the home and the children being left with improper supervision.

The man’s criminal background should have disqualified him from living in the home or caring for the foster children, according to the suit.

The suit also states that the door to the children’s bedroom was modified to lock from the outside so the foster mother and roommate “could host house parties fueled by drugs, alcohol, loud music and violence throughout the night.”

On July 7, 2018, and into the next morning, the foster mother and her roommate allegedly hosted a party at the home “where alcohol and/or drugs were consumed and where a physical altercation occurred between the attendees,” according to the suit. The foster mother then left the man in charge while she left the home in the early morning hours of July 8.

When the fire broke out, the man got out without realizing he’d left Maqkwone inside, according to the suit.

The lawsuit is seeking at least $100,000 in damages, as well as court costs and other fees.

A spokesman for DCFS said the department does not comment on pending litigation. The department is not named as a defendant in the complaint.