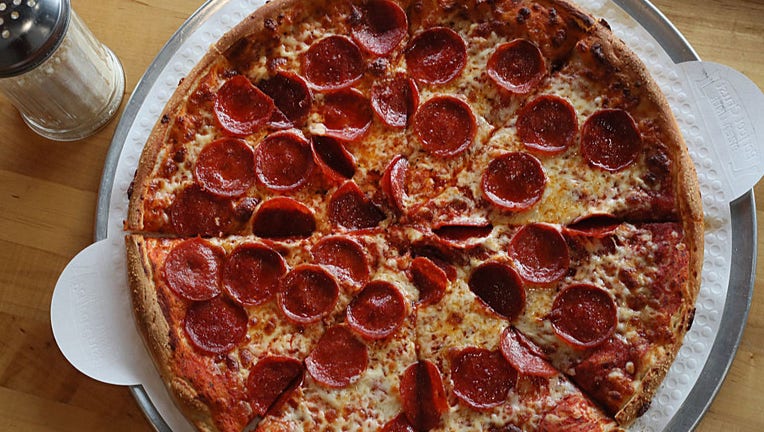 FILE - A pepperoni pizza is pictured in Watertown, Massachusetts, on Nov. 27, 2020. (Photo by Suzanne Kreiter/The Boston Globe via Getty Images)

September 20 is National Pepperoni Day 2022, a time to order and enjoy one of the most popular pizza toppings in the United States.

Pizza is often associated with Italy, but the modern-day pepperoni pizza we know is actually an American variety. John Mariani, a food writer and historian, once referred to it as "purely an Italian-American creation, like chicken Parmesan" in an interview with the New York Times.

Traditional pepperoni pizza is made with pizza sauce, mozzarella cheese, and pepperoni, which is typically a spicy salami made from cured pork and beef and seasoned with paprika.

"Pepperoni" comes from an Italian word for large peppers, such as bell peppers, Mariani told the newspaper. He added that the first reference to pepperoni in print was in 1919 — when U.S. pizzerias and Italian butcher shops began to flourish.

But Colin Caplan, a historian and author of books like "New Haven Apizza," said Americans’ love for pizza and pepperoni didn’t truly form until the mid-20th century. Caplan told Thrillist he found the first evidence of pepperoni as a pizza topping in 1950 from a photo of a wall menu at a pizzeria named The Spot in New Haven, Connecticut.

Rideshare driver travels to all 50 states to try local food, learn about America

Kreskin Torres, a 33-year-old Army veteran, kicked off his adventure in Los Angeles, California, and since then, he has visited 49 states. Soon, he will fly to Honolulu, Hawaii, and rent a car to achieve his 50-state milestone.

Given this love for pepperoni, many pizza chains are offering freebies and discounts in honor of the day.

BJ’s is celebrating National Pepperoni Pizza Day by offering a large pizza for half-price. Customers can get any large deep-dish or tavern-cut pizza for half off when ordering takeout by using the code "HALFOFF."

California Pizza Kitchen is offering a deal for all reward members. Newly registered users can receive a coupon for $5 off and a free small plate with purchase.

Domino’s is celebrating the special event with a mix-and-match deal. Customers can choose any two or more items and purchase them for just $5.99 each on National Pepperoni Pizza Day.

Grimaldi’s is giving reward members double points to celebrate. Customers need to sign up for the rewards program by Sept. 20, 2022, to receive the deal.

Customers can get a large Pepperoni Magnifico from Marco’s Pizza for just $9.99 with the promo code PEPMAG.

Papa John’s customers can order a limited-time pepperoni-stuffed crust pizza on September 20. Customers can also get a large, hand-stuffed pizza with cheese and pepperoni for $13.99.

Customers can score a free extra-large New York slice of pizza with the purchase of a drink, by signing up for Sbarro’s Slice Society.

Toppers Pizza is celebrating by offering two or more large menu items for only $10.99 each.

This story was reported from Cincinnati. FOX Business contributed.