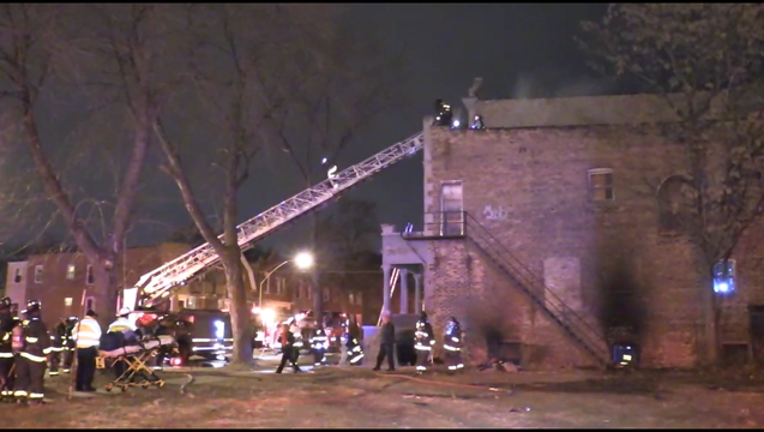 Firefighters responded to a blaze in a two-story house Saturday night in the 6600 block of South Champlain. | Network Video Productions

SUN-TIMES MEDIA WIRE - Retired Chicago Police Sergeant Ed Adams woke up Saturday night to the smell of smoke and the screams of a frantic mother on the street outside.

“My babies!” the woman was yelling.

The house across the the street was on fire. He could also hear screams coming from inside the two-story brick home, the Chicago Sun-Times is reporting.

“I tried to go in, but the flames and smoke were too much,” he said. “It was just a tragic situation.”

Two girls — 7-month-old Ziya Grace, and 2-year-old Samari Grace — were later found dead in the basement of the home where the blaze broke out in the 6600 block of South Champlain in the Woodlawn neighborhood on the South Side.

Autopsies Sunday found both girls died of carbon monoxide intoxication and inhalation of smoke and soot. Their deaths were ruled accidents.

Firefighters responded about 10:30 p.m. and were able to pull a 6-year-old boy from the basement; he was taken to Comer Children’s Hospital, where he was listed in critical condition, Deputy District Chief Michael Carbone said. Two women, ages 25 and 48, were able to escape the basement on their own and were taken to University of Chicago Medical Center, where their conditions were stabilized.

The “fast-spreading” fire prompted firefighters to make an “aggressive attack” during which a firefighter suffered minor injuries and was also taken to University of Chicago Medical Center, Carbone said.

There were no smoke alarms in the basement, where the fire began, fire officials said.

The cause of the fire appears to be accidental, but the Chicago Police Department’s Arson Unit is investigating, police said.

As a hostage negotiator and homicide detective during his 30 years with the Chicago Police Department, Adams said he was familiar with tragedy, but shook his head in grief as he described the chaotic scene and aftermath.

“I can still hear that woman’s screams,” he said. “I’ve run into several burning buildings and been successful, but this one didn’t happen.”