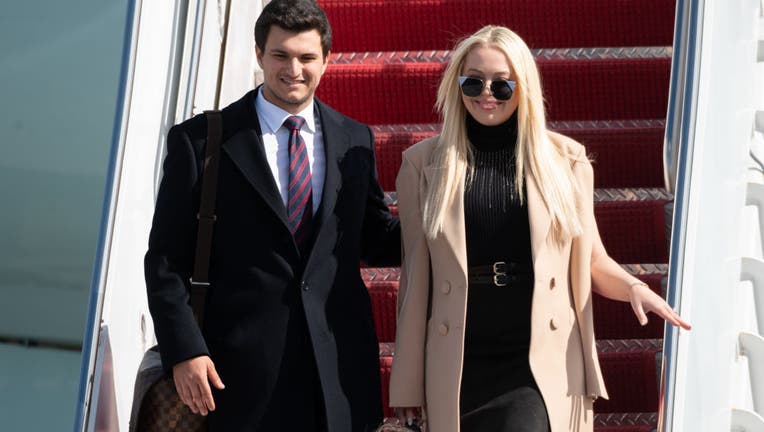 When Tiffany Trump, the daughter of former President Donald Trump, announced her engagement to billionaire boyfriend Michael Boulos this week, she played it cool, sharing just one photo of the couple — and not showing off the ring.

Thankfully, the jewelry outlet that sold the elegant ring is now doing that for her.

MORE IN LIFESTYLE: Woman reportedly returned $3K engagement ring because it's too 'cheap'

Samer Halimeh New York shared pictures of the ring on its Instagram page this week, along with photos of Tiffany Trump and Boulos with diamond dealer Samer Halimeh. The rock itself is an emerald-shaped 13+ carat diamond, and it's flanked by two more trapeze-cut stones.

Experts for both Ok! and the Daily Mail estimated the ring’s value at $1 million or more.

"Because love is simply worth it," the jeweler wrote in a Facebook post about the ring. "Congratulations to the power couple."

Tiffany Trump announced her engagement to Boulos on Tuesday, her father’s last day in office, in a social media post that included a photo taken inside the White House.

"It has been an honor to celebrate many milestones, historic occasions and create memories here at the White House, none more special than my engagement to my amazing fiancé Michael," she wrote.

Tiffany Trump is Donald Trump’s youngest daughter, who he had with his second wife, Marla Maples. Tiffany graduated from law school at Georgetown last year.

Get Bridgerton-inspired wedding looks for less

Some tips on how to get Bridgerton-inspired wedding looks for less.

Her new fiancé is a 23-year-old Lebanese business executive, the son of CEO Massad Boulos and heir of the Nigerian business Boulos Enterprises.

The ring may have special meaning to the couple, who have reportedly been dating since at least 2018.

The diamond dealer, Halimeh, is also originally from Lebanon, and Boulos previously bought Trump a diamond friendship bracelet worth more than $680,000 from Halimeh’s London shop while her father was making a state visit to the U.K. in 2019.

"Michael Boulos and Tiffany Trump visited our Knightsbridge boutique for around 45 minutes and from meeting them I can say that they are a really lovely couple, very down-to-earth and clearly very happy together," store manager Maan Chakhchir told the Evening Standard at the time.

For updates, go to Foxnews.com.