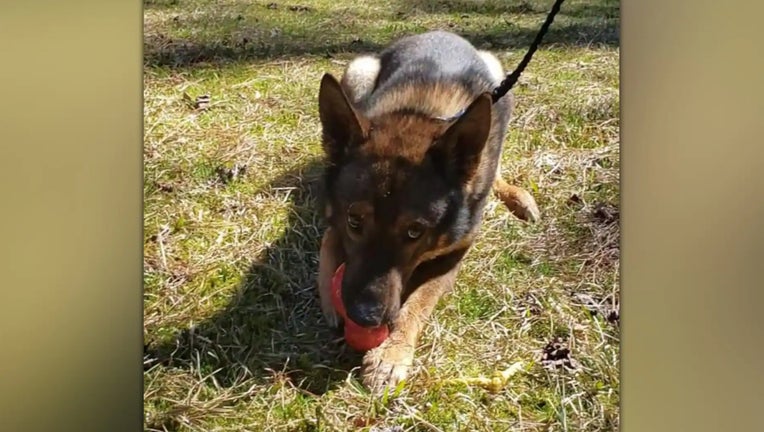 A North Carolina police officer who was seen on a video appearing to lift a police dog by its leash and slam the canine into the side of a patrol car has resigned, police said Wednesday.

Salisbury Police Officer James Hampton tendered his resignation after the department recommended his termination, the department said in a press release.

A video was sent to WJZY, the Fox-affiliated TV station serving Charlotte, earlier this month according to the station. In the video, a dog – later identified as Zuul – exits the vehicle. An officer can be heard yelling, then walks over to the dog and puts a leash on it. The officer picks up the dog by the leash and swings the K-9 over his shoulder as he walks back to the car.

"We’re good, no witnesses," someone in the video can be heard saying.

Soon after, the officer appears to slam Zuul into the side of the vehicle before shoving the canine inside. He then appears to strike the dog.

The Salisbury Police Department confirmed that Officer James Hampton was the dog’s handler. SPD said Hampton was "engaging in inappropriate discipline of Zuul."

They said a department review determined that he had acted in "a manner entirely inconsistent with his K-9 training and had violated Police Department policy."

Hampton tendered his resignation after a due process hearing. SPD said it will continue to review and make the necessary changes to our K-9 training operations, policies and procedures that align with industry best practices."

Salisbury Police Chief Jerry Stokes told reporters earlier this month that Hampton was separated from the K-9 while SPD conducted a review.

"The canine was not harmed and is healthy and being well-cared for," he said.

The chief noted that police dogs are trained to use force against criminal suspects and a handler must ensure they have complete control over the dog at all times. He added that at no point was a Taser used on the animal.

"When a canine is noncompliant with the handler’s commands, the handler is trained to correct the dog," Stokes said. "Canine training tactics and corrective measures can sometimes be alarming out of context. SPD cannot and will not comment about whether the training tactics used in the video were appropriate, because that is still being reviewed."