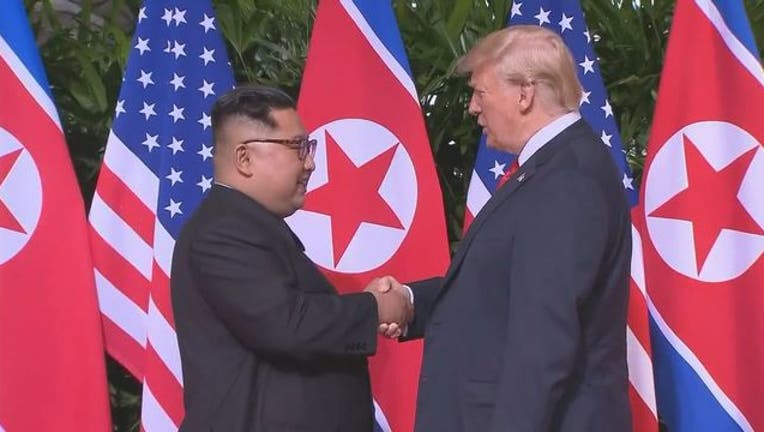 PYONGYANG, North Korea (AP) -- High-level talks between the United States and North Korea appeared to hit a snag on Saturday as Pyongyang said a visit by U.S. Secretary of State Mike Pompeo had been "regrettable" and accused Washington of making "gangster-like" demands to pressure the country into abandoning its nuclear weapons.

The statement from the North came just hours after Pompeo wrapped up two days of talks with senior North Korean officials without meeting North Korean leader Kim Jong Un but with commitments for new discussions on denuclearization and the repatriation of the remains of American soldiers killed during the Korean War.

While Pompeo offered a relatively positive assessment of his meetings, North Korea's Foreign Ministry said in a statement that the U.S. betrayed the spirit of last month's summit between President Donald Trump and Kim by making "unilateral and gangster-like" demands on "CVID," or the complete, verifiable and irreversible denuclearization of North Korea.

It said the outcome of the follow-up talks was "very concerning" because it has led to a "dangerous phase that might rattle our willingness for denuclearization that had been firm."

"We had expected that the U.S. side would offer constructive measures that would help build trust based on the spirit of the leaders' summit ... we were also thinking about providing reciprocal measures," said the statement, released by an unnamed spokesman and carried by the North's official Korean Central News Agency.

"However, the attitude and stance the United States showed in the first high-level meeting (between the countries) was no doubt regrettable," the spokesman said. "Our expectations and hopes were so naive it could be called foolish."

According to the spokesman, during the talks with Pompeo the North raised the issue of a possible declaration to formally end the 1950-53 Korean War, which concluded with an armistice and not a peace treaty. It also offered to discuss the closure of a missile engine test site that would "physically affirm" a move to halt the production of intercontinental range ballistic missiles and setting up working-level discussions for the return of U.S. war remains.

However, the spokesman said the United States came up with a variety of "conditions and excuses" to delay a declaration on ending the war. The spokesman also downplayed the significance of the United States suspending its military exercises with South Korea, saying the North made a larger concession by blowing up the tunnels at its nuclear test site.

In criticizing the talks with Pompeo, however, the North carefully avoided attacking Trump, saying "we wholly maintain our trust toward President Trump," but also that Washington must not allow "headwinds" against the "wills of the leaders."

In comments to reporters before leaving Pyongyang, Pompeo said his conversations with senior North Korean official Kim Yong Chol had been "productive," conducted "in good faith" and that "a great deal of progress" had been made in some areas. He stressed that "there's still more work to be done" in other areas, much of which would be done by working groups that the two sides have set up to deal with specific issues.

Pompeo said a Pentagon team would be meeting with North Korean officials on or about July 12 at the border between North and South Korea to discuss the repatriation of remains and that working level talks would be held soon on the destruction of North Korea's missile engine testing facility.

In the days following his historic June 12 summit with Kim Jong Un in Singapore, Trump had announced that the return of the remains and the destruction of the missile facility had been completed or were in progress.

Pompeo, however, said that more talks were needed on both.

"We now have a meeting set up for July 12 -- it could move by one day or two -- where there will be discussions between the folks responsible for the repatriation of remains. (It) will take place at the border and that process will begin to develop over the days that follow," he said as he boarded his plane for Tokyo.

Earlier, Pompeo and Kim Yong Chol both said they needed clarity on the parameters of an agreement to denuclearize the Korean Peninsula that Trump and Kim Jong Un agreed to in Singapore. The trip was Pompeo's third to Pyongyang since April and his first since the summit.

Unlike his previous visits, which have been one-day affairs during which he has met with Kim Jong Un, Pompeo spent the night at a government guesthouse in Pyongyang and did not see the North Korean leader, although U.S. officials had suggested such a meeting was expected. State Department spokeswoman Heather Nauert said no meeting had been planned.

As they began their talks on Saturday, Kim Yong Chol alluded to the fact that Pompeo and his delegation had stayed overnight in Pyongyang.

"We did have very serious discussions on very important matters yesterday," Kim said. "So, thinking about those discussions you might have not slept well last night."

Pompeo, who spoke with Trump, national security adviser John Bolton and White House chief of staff John Kelly by secure phone before starting Saturday's session, replied that he "slept just fine." He added that the Trump administration was committed to reaching a deal under which North Korea would denuclearize and realize economic benefits in return.

There was no immediate explanation of what needed to be clarified, but the two sides have been struggling to specify what exactly "denuclearization" would entail and how it could be verified to the satisfaction of the United States.

Pompeo and Kim met for nearly three hours Friday and then had dinner amid growing skepticism over how serious Kim Jong Un is about giving up his nuclear arsenal and translating the upbeat rhetoric following his summit with Trump into concrete action.