CHICAGO - A tornado with peak winds of 110 miles per hour touched down in Rogers Park Monday afternoon, the National Weather Service confirmed Tuesday.

A map of the tornado’s path shows its 3-mile path stretch from near Touhy and Crawford avenues in Lincolnwood to Rogers Park and into Lake Michigan, where the weather service said it turned into a waterspout.

The twister, which touched down on the North Side around 4 p.m., was about 300 yards wide.

Despite the storm’s heavy damage, concentrated in the Rogers Park neighborhood, city agencies reported no injuries to residents. 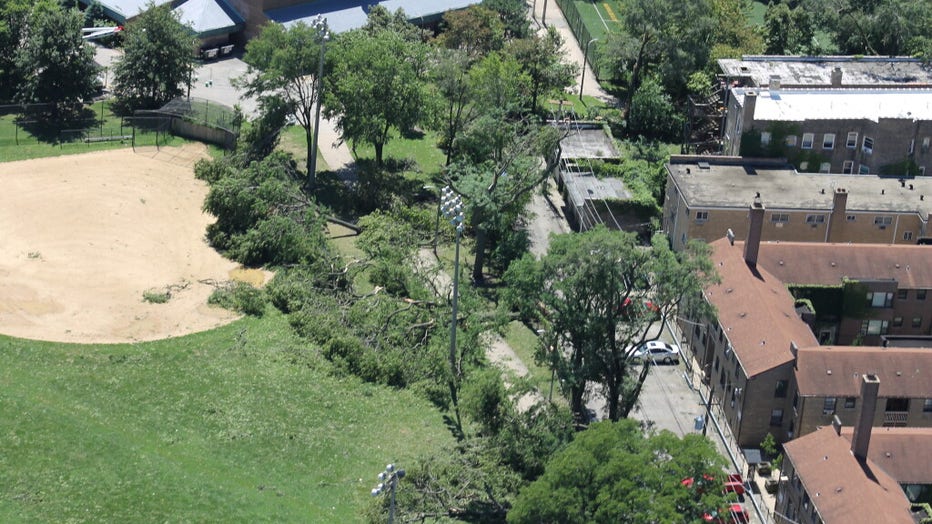 An aerial photo shows destruction in Rogers Park after a tornado ripped through the North Side Aug. 10, 2020. |OEMC

About 60,000 people in Chicago were still without power Tuesday evening, according to ComEd senior vice president Melissa Washington. Crews restored 60% of outages since the peak when some 900,000 ComEd customers were without power, she said.

Ald. Matt O’Shea (19th) said Tuesday morning there were about 4,300 customers without power, including two senior living facilities, in his Southwest Side ward.

Some customers, however, will be kept waiting days for power to return.

Most people without power will have it restored by Friday, according to ComEd spokesman John Schoen. Some areas with “extensive damage” may be waiting until Saturday, he said.

“Unfortunately some people will be waiting, but not everybody,” he said. “We have crews working around the clock getting the power back on.”

The utility has called in about 1,500 employees from out of state to help restore power in Illinois.

More than 35,000 emergency calls for tree removal had been logged with the city as of Tuesday evening, according to the Streets and Sanitation Department. The trees were “blocking streets or causing some sort of danger,” department spokeswoman Cristina Villarreal said.

Hundreds had been removed, and “we’ll be out until all are cleaned,” she said.

The city also responded to 375 reports of downed wires and nearly 80 malfunctioning traffic lights, according to Tom Carney, first deputy commissioner of Chicago Department of Transportation.