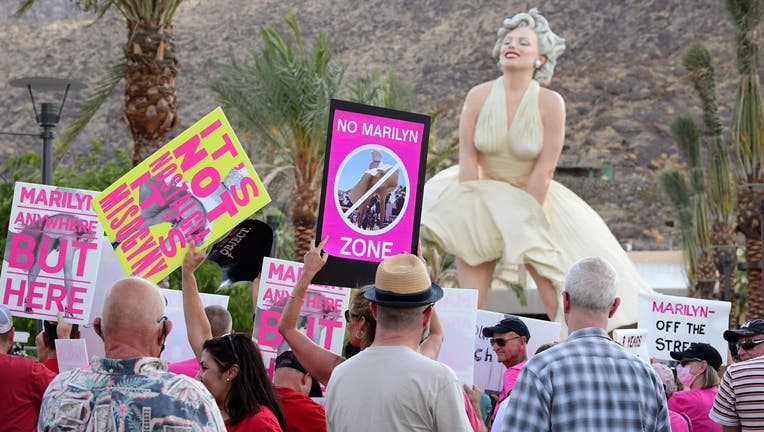 Protesters gather in front of the "Forever Marilyn" statue unveiled today on its return to Palm Springs, California on June 20, 2021. - The 26-foot tall and 17-ton sculpture by artist Seward Johnson Atelier was displayed earlier this decade in Palm S

For some people, the iconic image of Marilyn Monroe with her skirt flying upwards is nostalgic. For others, it's just misogyny.

Over the weekend, dozens of people gathered to protest in Palm Springs, Calif., where a 26-foot tall statue of Marilyn Monroe with her skirt flying up was installed.

The statue by Seward Johnson Atelier was on display in downtown Chicago in 2011.

In Palm Springs, protesters waved signs saying "Marilyn anywhere but here" and "It's not nostalgia, it's misogyny" and "No Marilyn zone."

Most were upset with the way the statue encourages viewers to stand underneath and look up her skirt. Others said the statue spoils the natural landscape of the area.

The cast of F9 and Jurassic World respond to crossover rumors

Jake Hamilton interviews the cast of Fast and Furious 9, and the stars respond to the rumor of a crossover with Jurassic World. F9 is one of the year's most anticipated films, hitting the box office this Friday.