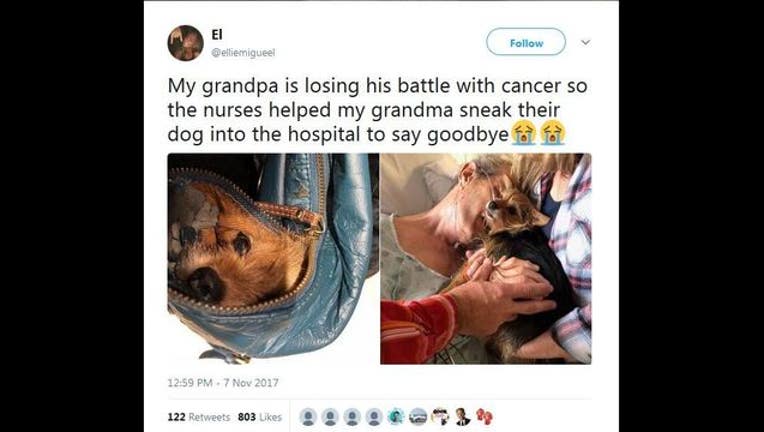 (FOX NEWS) - An ailing grandfather died on Wednesday after battling cancer for several years, but not before his team of nurses and grieving relatives hatched a plan to sneak his beloved pooch into the hospital so that he could say a final goodbye. Ellie Miguel, David King’s granddaughter, shared the plan and photos her grandfather and his dog, Lil Fee, on Twitter, where they quickly gained attention.

“My grandpa is losing his battle with cancer so the nurses helped my grandma sneak their dog into the hospital to say goodbye,” Miguel wrote alongside the Nov. 7 tweet.

Miguel did not disclose which hospital her grandfather had been staying at, nor what his exact diagnosis was, but told Yahoo Lifestyle that he was concerned he wouldn’t get to say goodbye to his loyal companion.

“My grandpa loved his dog Lil Fee,” she told the news outlet. “She would follow him around everywhere. He would bring her everywhere he could. My grandpa had been battling cancer for the past couple of years, but last week it took over his whole body.”