The fire that broke out at the Oakland Hills Country Club quickly burned through the entire building. Credit: Murray Wikol/Storyful.

The Bloomfield Township fire chief said crews that initially responded to reports of an odor of smoke in the building quickly found themselves battling a three alarm fire. More than a dozen fire departments responded as a result.

"Crews found a light smoke and odor. They attempted to locate it, and over the course of time, conditions got worse," said chief John Leroy.

Leroy would not classify the building as a complete loss but said there was extensive damage. He said due to the fire's damage through the massive structure, firefighters would likely be on the scene until at least Friday.

Crews were still working to put out flames in some hot spots in the building.

The fire that broke out at the Oakland Hills Country Club quickly burned through the entire building. Credit: Murray Wikol/Storyful.

Attempts to pour water on the fire didn't help the situation either since much of the fire was beneath the roof. Fire crews are still unsure how the fire started and haven't been able to locate where it began.

Restaurants, offices, the kitchen, and other facilities located in the building's center area were all caught in the blaze.

Worsening weather conditions may hamper efforts as well, Leroy said. Wind and ice will likely make it more dangerous to put out. 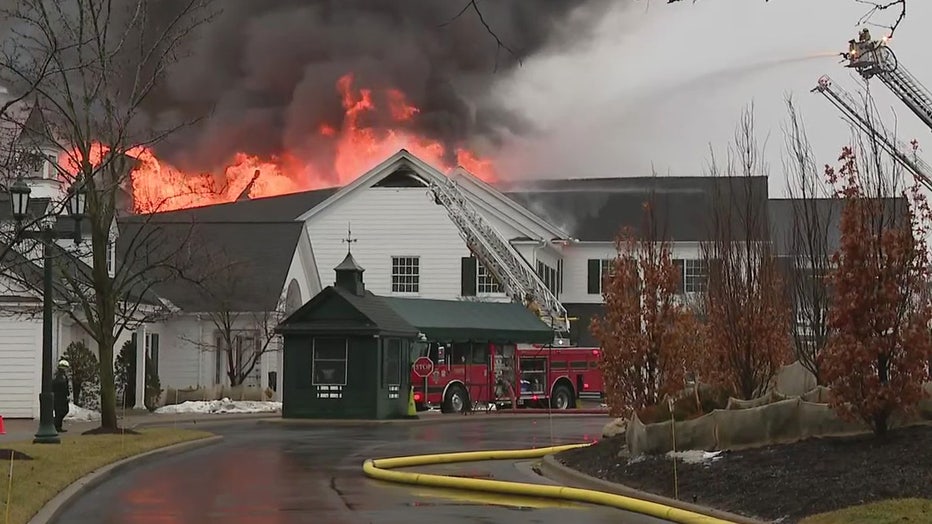 Where is the Oakland Hills Country Club?

The Oakland Hills Country Club is in Oakland County, Michigan, and is about 15 miles north of Detroit.

The country club sits on Maple Road between Lahser and Telegraph and consists of two courses: the north and the south course.

Maple Road runs between the two courses but players can cross to each side via an arched pedestrian bridge.

What is the history of the Oakland Hills Country Club

The Oakland Hills Country Club is one of the most prestigious courses in Michigan and has hosted the six U.S. Open Championships, three PGA Championships, and the 2004 Ryder Cup.

Originally founded in 1916, it has played a significant role in history of the sport of golf in the United States.

Construction started in 1917 after two Ford executives bought farmland on Maple Road. The South Course of Oakland Hills opened first in 1918 and the clubhouse was then finished in August 1922. That same year, construction started on the North Course and was finished two years later.

The two golf courses are on either side of Maple Road and, connecting the two, is the world's largest arched aluminum pedestrian bridge. It's 210 feet long, 11 feet wide, and weighs over 40,000 pounds.

The club just finished a complete renovation of the South Course in July 2021 with hopes of being considered for a future U.S. Open or PGA Championship.

In 1951, when Hogan won the U.S. Open at Oakland Hills, he gave the course it's iconic nickname.

"If I had to play this course for a living every week, I'd get into another business," Hogan said at the time. "I'm glad I brought this course -- this monster -- to its knees."

The course was made much tougher ahead of the 1951 championship when Oakland Hills' Executive Committee hired Robert Trent Jones Sr. to "toughen up" the South Course.

How much harder was the course? Hogan won the historic tournament and finished at 7-over-par.