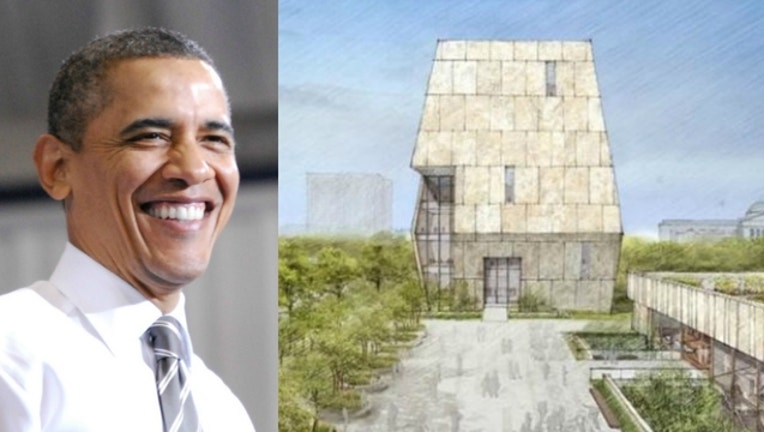 (Left) Daniel Borman / Flickr (Right) The Obama Presidential Center design, as seen from the south side of the campus. (Obama.org)

FOX NEWS - In their effort to break the mold, the planners of the Obama Presidential Center in Chicago are taking heat for some less-than-lofty features in the sprawling complex.

Reports first surfaced last fall that the monument to the first black president’s legacy was taking on an activity-center vibe. There would be a museum – but also a basketball court, possibly a room for yoga classes, and a test kitchen to teach visitors “about the full production cycle of nutritious food.”
It’s a reference to former first lady Michelle Obama’s campaign for healthy eating and lifestyles.

But Chicago Tribune columnist Ron Grossman trashed the “test kitchen” idea as not worthy of the ideals and history for which the presidential center is supposed to stand.

“Mr. President, I’ve got to tell you: The renderings for your museum are ‘little plans,’ more likely to congeal than stir blood,” he wrote.

The problem, Grossman wrote, isn’t the design but the add-ons.

“What brought me up short was a space in the adjoining Forum building labeled ‘test kitchen.’ Presumably that reflects Michelle Obama’s war on junk food. The museum’s champions similarly suggest it could host yoga classes,” he wrote. “President Obama, is that how you want to be remembered? As the healthy-eating and meditation-advocating president?”

He added, “That’s not how I want the story to come down to my grandchildren’s children.”

Grossman encouraged the planners to reflect the "revolution" his election stood for, breaking through decades of racism and exclusion for black Americans.