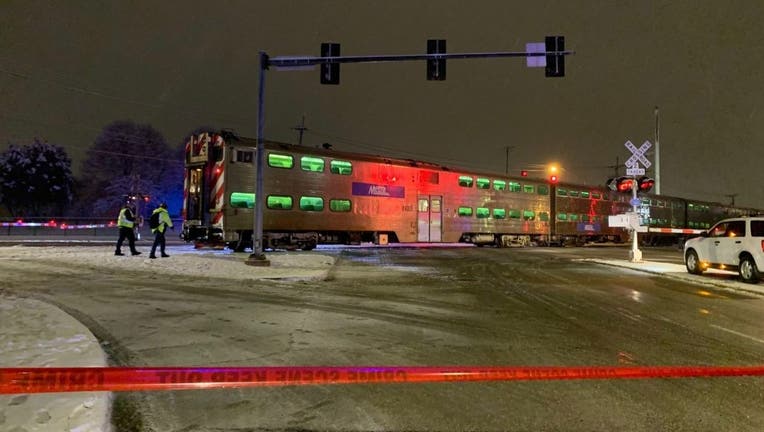 A Metra SouthWest Service train hit a vehicle Feb. 12, 2020, near 87th Street and Pulaski Road in Scottsdale on the Southwest Side. | Sam Kelly/Sun-Times

CHICAGO - Two people who were injured when a Metra train hit a car earlier this month in Scottsdale on the Southwest Side are suing the transit agency for negligence.

The suit states Poe and Ware were in the car Feb. 12 when it got caught in a “no man’s land” between two crossing gates at 87th Street and Pulaski Road and was subsequently hit by an outbound Metra SouthWest Service train.

The impact caused the car to hit 19-year-old Christopher T. Davis, who was on foot nearby, according to a Metra spokesperson and the Cook County medical examiner’s office. He died two days later at Christ Medical Center in Oak Lawn.

Three other people were taken to hospitals in critical condition, one to Christ and the others to the University of Chicago Medical Center, according to the Chicago Fire Department.

The suit accuses Metra of negligence for failing to stop the train before it hit the car or operate trains at lower speeds because of snowy conditions at the time of the crash.

It also alleges that Metra and Norfolk Southern, which owns the tracks in the area, knew about previous crashes at the crossing and failed to properly maintain the signal system or warn motorists and train operators about the risk of vehicles getting stuck between the gates.

A Metra spokesperson reached Wednesday evening said the agency does not comment on pending litigation. A representative for Norfolk Southern did not immediately respond to a request for comment.

The lawsuit is seeking at least $200,000 in damages plus legal costs.