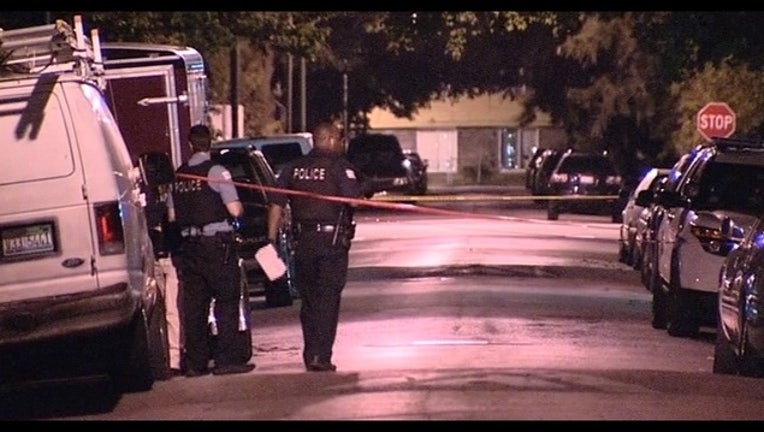 Police investigate the scene of a shooting Wednesday night in the 9200 block of South University. | Network Video Productions

CHICAGO (STMW) - One man was killed and at least eight other people — including a truck driver on the Bishop Ford Freeway — were wounded in shootings Wednesday on the city’s South and West sides, police said.

Most recently, a man was shot to death late Wednesday in the Burnside neighborhood on the South Side, police said.

The man, 48, was standing on the sidewalk in the 9200 block of South University about 11:10 p.m., when someone walked up and opened fire, according to Chicago Police.

He was shot in the chest, leg and face and was taken to Advocate Christ Medical Center in Oak Lawn, where he was later pronounced dead, police said. The Cook County medical examiner’s office could not immediately confirm the death early Thursday.

About 9:10 p.m. in the Southwest Side Gage Park neighborhood, a man — described by police only as an adult — was shot in the groin in the 5100 block of South Sawyer, police said. He took himself to St. Anthony Hospital, but further details were not available, police said.

Less than 30 minutes earlier in the University Village neighborhood,  a 45-year-old man was standing in a park in the 1400 block of West 15th Street about 8:45 p.m. when a male on a bicycle rode up and shot him in the abdomen and buttocks, police said. The man was taken to Stroger Hospital, where his condition stabilized.

About 8:30 p.m., a semi driver was injured in a shooting on the Bishop Ford Freeway (I-94) Wednesday night on the Far South Side. The 29-year-old man was driving the semi northbound on I-94 just south of 130th Street when the driver of another vehicle shot him in the leg, according to Illinois State Police. He was taken to Advocate Christ Medical Center in Oak Lawn with non-life-threatening injuries.

A man was wounded in a drive-by shooting about 90 minutes earlier in the Greater Grand Crossing neighborhood on the South Side. About 7 p.m., the 21-year-old was in the 7100 block of South King Drive when a red Ford Escort drove by and someone in the vehicle shot him in the left arm and right leg, police said. The two people in the car were both wearing ski masks. The man was taken to Christ Medical Center, where his condition had stabilized, police said.

About 3:45 p.m. in the West Side Austin neighborhood, an 18-year-old man was shot in the hip or back in the 5800 block of West Potomac, police said. He was taken to Loyola University Medical Center in Maywood, where his condition was stabilized.

A man walked into a hospital after being shot Wednesday morning in the West Pullman neighborhood on the Far South Side. The 27-year-old told investigators he was shot in the 11800 block of South Harvard about 11:30 a.m., police said. He walked into Roseland Hospital with a gunshot wound to his lower back, and was listed in serious condition.

Earlier Wednesday, a man was shot in the Back of the Yards neighborhood on the South Side. The 19-year-old was walking in the 5100 block of South Winchester about 2:10 a.m. when someone got out of a vehicle and fired shots, police said. He was shot in the ankle and was taken in good condition to Holy Cross Hospital. A police source said the man is a documented gang member.

Wednesday’s first shooting happened about 1 a.m. in the Auburn Gresham neighborhood on the South Side. A 28-year-old man was walking in the 1700 block of West 77th Street when he heard gunfire and realized he’d been shot in the leg, police said. He was taken in good condition to Little Company of Mary Hospital and Health Care Centers in Evergreen Park.