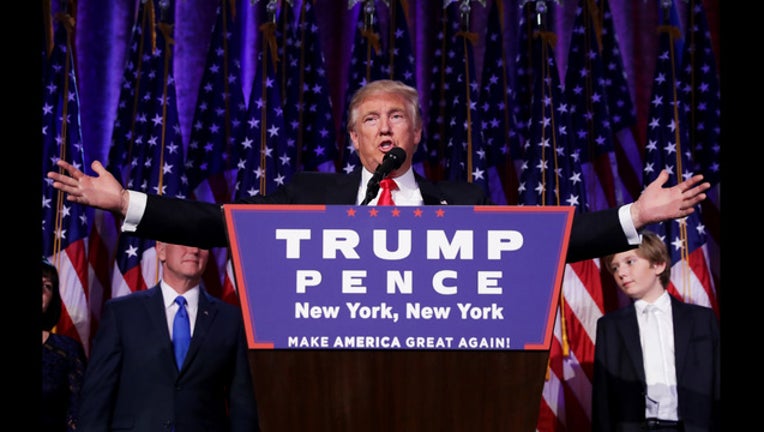 WASHINGTON (AP) — Donald Trump handily won the election a year ago Wednesday. Ask him and he'll tell you about it.

Ten months into his presidency, Trump is still focused — some say fixated — on the election that catapulted him to power. Egged on by longtime friends and cable news, he repeatedly attacks his vanquished opponent, Democrat Hillary Clinton. In public and in private, he still boasts of the size of his victory.

"It was great victory, and a victory that made a lot of people very happy," Trump said Tuesday in Seoul, South Korea, his second stop on a five-country visit to Asia.
The president will spend Wednesday shuttling from Seoul to Beijing for meetings with Chinese President Xi Jinping. He mused to reporters earlier in the week that he'd considered having "a big celebration party" but White House officials said there were no plans for any formal event marking the occasion.

Still, there's no doubt the president remains preoccupied by his election, a fixation friends and advisers say is part ego and part defense mechanism. Despite occupying the most powerful position in the world, Trump has told confidants he still doesn't get the credit he deserves for defeating Clinton. And friends say he's well aware of the fact that numerous members of his own Republican Party expected him to lose and still cringe at seeing him in the White House.

"His obsession with the election is the fact that he wasn't ever accepted by the establishment," said Christopher Ruddy, a friend of the president and the CEO of Newsmax. "They have not given him the deference typical of the president."

Trump won the Electoral College vote by a comfortable margin but lost the popular vote by nearly 2.9 million votes to Clinton.

Trump's insecurity about his status has been magnified by Democratic accusations that he won the White House in part because of Russia's interference in the election. The investigations into Russian meddling are now at the West Wing doorstep, with current and former White House officials being summoned to speak with special counsel Bob Mueller and former campaign chairman Paul Manafort indicted last week. The president has responded by calling on Republican lawmakers and the Justice Department to investigate Clinton's potential ties to Russia.

The White House said Trump isn't fixated on his past successes or the investigations shadowing his administration. Spokeswoman Sarah Huckabee Sanders said Trump's focus is on the fact that "the stock market has hit record highs, unemployment has hit a 17-year low, and (the Islamic State) is on the run."
"Over the next seven years, this president plans to keep his promises to the American people and create a more prosperous, free and secure future for all Americans," Sanders said.

Still, the 2016 election arguably remains Trump's most significant political accomplishment. He's struggled in office to fulfill several of his lofty campaign promises, including overhauling President Barack Obama's signature health care law and ripping up the Iran nuclear deal. He faces the very real prospect of ending 2017 without any significant legislative accomplishments, unless Republicans can coalesce around a tax reform package in the next seven weeks.

Some Republicans close to the White House say Trump's obsession with the election isn't quite as overt as it was in the early days of his presidency, when he seemed to turn every news conference, rally or private policy discussion into an opportunity to gloat about his electoral victory. Two Republican congressional aides said Trump still brings the election up on occasion during meetings with lawmakers, but not with the frequency he did earlier in the year. He also appears to have stopped handing out colored copies of the Electoral College map, something he did on occasion during his first few months in office.

The congressional aides, along with five White House officials and outside Trump allies, insisted on anonymity because they were not authorized to publicly disclose private discussions.

One election-related attribute that hasn't slowed is Trump's intense focus on Clinton, who no longer holds public office and almost certainly has no plans to run for the presidency a third time. Trump has latched on to revelations that Clinton's campaign paid a research firm that produced a dossier of his unproven ties to Russia and he's seized on a new tell-all book about the 2016 campaign from former Democratic Party chairwoman Donna Brazile.

White House officials say that to Trump, Clinton and her years of political baggage are a reminder of the reasons millions of people voted for him. Trump friends like Roger Stone, a Republican operative who has spent years spinning stories about the former secretary of state and former President Bill Clinton, have also encouraged the president to keep up the attacks on his formal rival. And in an example of Trump's often symbiotic relationship with Fox News, friends say the president gets validation from the cable channel's heavy rotation of Clinton-related news.

As Trump hits the one-year mark of his election victory, a favorite parlor game among Republicans and several of the president's allies is whether the 71-year-old will try to repeat the feat in 2020. His campaign launched work on a re-election bid shortly after the inauguration and White House officials frequently refer to Trump serving two terms. But others in his orbit are less certain.

"He could be a one-term, he could decide to not run again," Ruddy said. "He's the kind of guy that doesn't psychologically need the presidency."