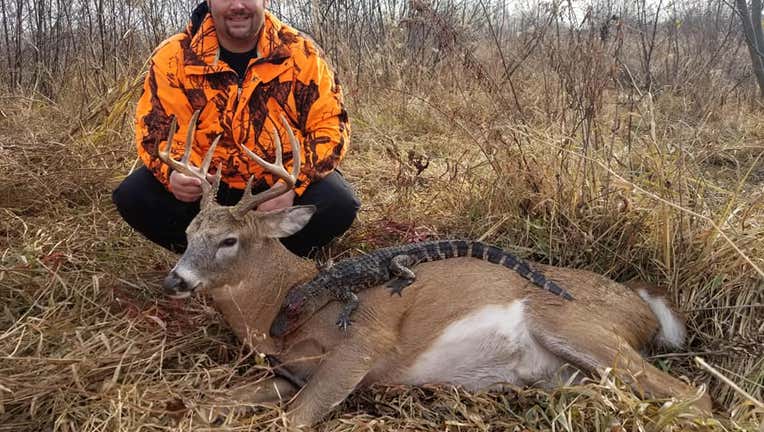 Minnesota hunter Cory Klocek harvested his first buck with a shotgun this weekend, but the deer is not the animal he will remember the 2020 gun opener for. (Cory Klocek/Facebook)

(FOX 9) - A Zimmerman sportsman harvested his first buck with a shotgun during the firearm hunting opener this weekend, but he is more likey to remember the day as when he shot his first alligator.

According to Cory Klocek, he was tracking a deer around a pond Saturday morning on land in East Bethel, Minn. when he saw a 3-foot-long alligator about 10 feet in front of him. Klocek contacted a game warden who told him he was allowed to shoot it.

"At first I thought somebody was playing a prank on me," he said of the moment he saw the alligator. "That’s not something you see and then I thought maybe it’s rubber it’s fake and then he moved and I said nope that’s a real live alligator in Minnesota in November."

He said he immediately called his wife after talking to the game warden, who was similarly shocked. 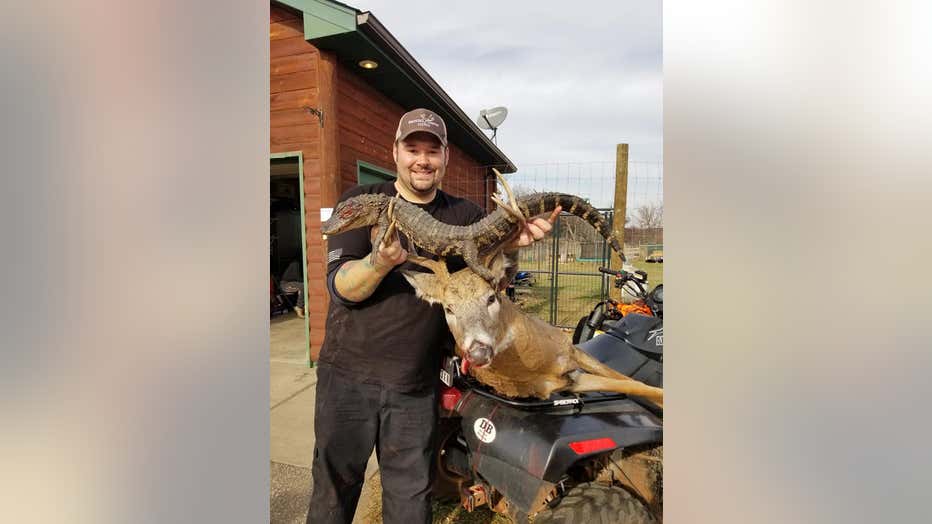 "One of those things that you don't every find when you're hunting in Minnesota," he said when recalling his most unique firearm opener.

He is not sure how the alligator found its way into the Minnesota woods, but he guesses that it was someone’s pet that was released when it got too big.

“Only in 2020 can you go out to sit for deer gun season opener in Minnesota and shoot an alligator,” Klocek said on Facebook. “I’m still at a loss of words.”

Klocek said his plan is to mount the 10-point buck along with the alligator in a taxidermy piece.

"This is one of those stories that's going to be told in my family for generations, you know?" he said..

In a statement Sunday, the Minnesota DNR said the animal would likely not have survived the winter and has no special protections in the state of Minnesota.

Here is the DNR's full statement:

While we don’t know the background of this particular animal, the DNR from time to time receives reports of reptiles such as alligators and caimans. Oftentimes, these turn out to be pets that were turned loose or escaped from their owners. These animals are not native to Minnesota and would be unable to survive the winter. Alligators and reptiles like them are invasive species in Minnesota, and they have no special protections.