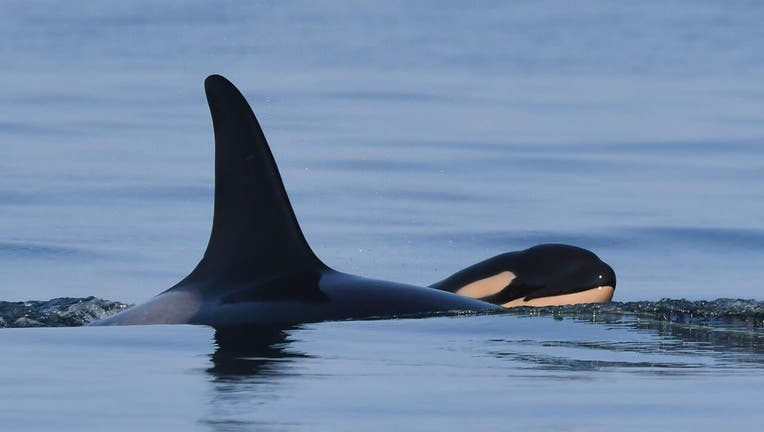 The new calf, J57, with its mother, J35, also known as Tahlequah, were spotted in the eastern Strait of Juan de Fuca in U.S. waters on Friday. (Katie Jones via Center for Whale Research)

The grieving killer whale who made global headlines two years ago for carrying her dead calf for more than two weeks is now a new mother, researchers announced Sunday.

The Center for Whale Research said the endangered orca whale, named Tahlequah, was spotted in the eastern Strait of Juan de Fuca in U.S. waters between Washington state and Vancouver Island with her new calf.

"Hooray! Her new calf appeared healthy and precocious, swimming vigorously alongside its mother in its second day of free-swimming life," the group said on its website.

Researchers believe the calf, known as J57, was likely born on Friday because its dorsal fin was upright.

"We know that it was not born today because its dorsal fin was upright, and we know that it takes a day or two to straighten after being bent over in the womb, so we assign its birthday as September 4, 2020," the group said.

Tahlequah, a Southern Resident killer whale, was mostly separate from the other whales and was observed being "very evasive" as she crossed the border into Canada.

"We ended our encounter with her after a few minutes and wished them well on their way," the group said.

Tahlequah famously conducted a "tour of grief" in the summer of 2018, carrying her dead calf for more than 1,000 miles over 17 days.

GET THE NEWS YOU NEED: Sign up for the FOX 35 newsletters

The group said the whale, also known as J35, became pregnant again in February last year. She was spotted in July.

In a blog post from July, marine conservation group SR3 explained that pregnant whales have been spotted among the Southern Resident killer whales. The research was based on aerial photos collected by Holly Fearnbach of SR3 and John Durban of Southall Environmental Associates.

“With such a small population (Center for Whale Research shows the population at 73 whales), every successful birth is hugely important for recovery,” explained SR3 in its blog post.

The Marine Mammal Commission notes that in June 2019 the population of Southern Resident killer whales was 76 in June 2019, its lowest point in 34 years.