The owner of a west suburban kennel that caught fire in 2019, killing 29 dogs, learned his sentence on Tuesday.

DUPAGE COUNTY - The owner of a west suburban kennel that caught fire in 2019, killing 29 dogs, learned his sentence on Tuesday.

But the owner got just a fraction of the 180 day jail sentence prosecutors were asking for, and animal rescue activists in DuPage County say it’s not enough.

Kristina Minwegen said she and her French Bulldog ‘Aiden’ were inseparable, except for a few days in 2019 when she boarded him at the D and D Kennel near West Chicago while on vacation.

"I tried for four days when I got back to pick him up and Garrett wouldn’t answer me," Minwegen recalled outside the courthouse. "My dog should never have been there."

Aiden was one of 29 dogs, mostly rescues, who burned to death when the D and D Kennel caught fire.

Kennel owner Garrett Mercado was absent when the fire broke out, and investigators found other dogs that survived the fire had been mistreated, with puncture wounds, abrasions, weight loss and dehydration.

"It was horrible. It’s the worst situation I’ve ever been through," said Shannon Hedman, who worked as a DuPage County animal services officer at the time of the fire. "It was pandemonium. It was dead animals. It was attacked animals. Dying animals."

Last month, Mercado was convicted on counts of animal cruelty and violation of owners duties. On Tuesday, those dog rescuers and animal officers were in court as a DuPage County judge sentenced Mercado to 20 days in DuPage County Jail and 100 hours of community service. 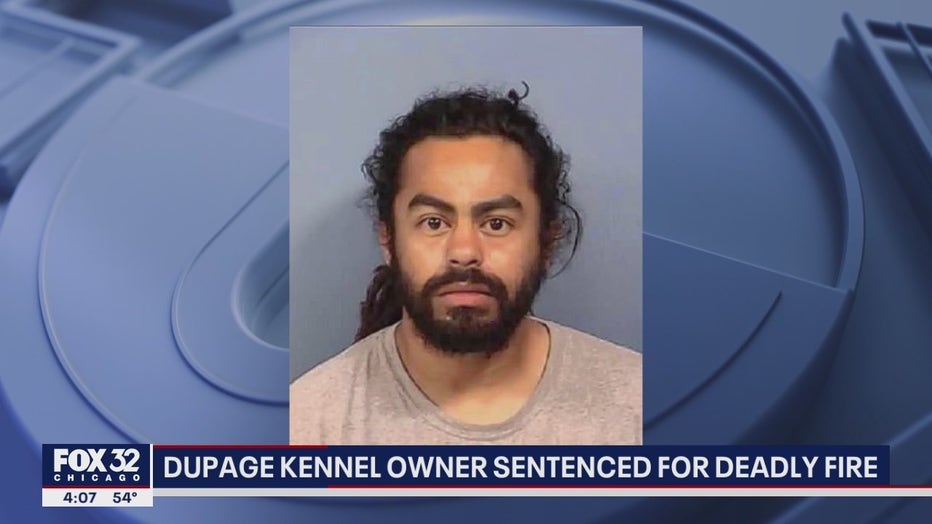 "This is a baby step for accountability. Garrett's not sorry. He hasn't said sorry. He doesn't care. He still thinks he's not wrong. He's mad we showed up at every court date," said Minwegen.

The judge also ordered that Mercado have no contact with animals for six years, with the exception of a single personal pet.

"I wish that he would be going to jail longer, but I'm happy that the judge ordered the no contact for the six years. I think that's most important that he's not allowed to work with animals or operate another business for that time," said Hedman.

Now, the animal activists say they plan to work for tougher laws that will put some real teeth into animal cruelty charges.