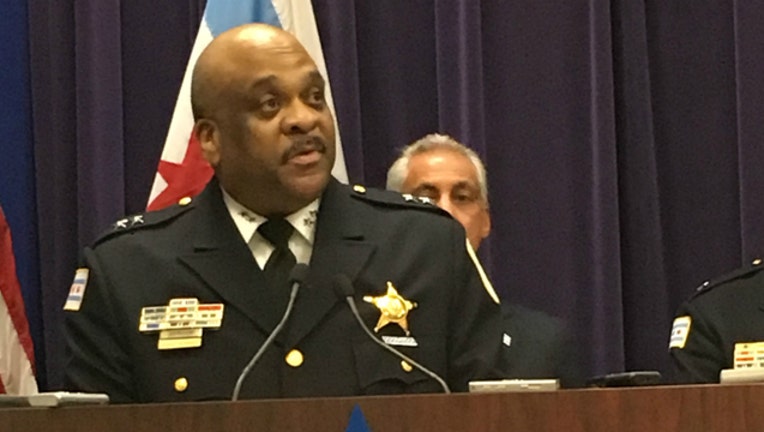 CHICAGO (AP) - A task force Chicago Mayor Rahm Emanuel established to look into police practices said the department must acknowledge its racist past and overhaul the way it handles excessive force allegations, as City Council members neared a final vote on Emanuel's hand-picked choice for chief — an African-American with 27 years on the force.

In a draft executive summary first obtained by the Chicago Tribune and published Tuesday, the Task Force on Police Accountability recommended replacing the independent review authority that currently investigates misconduct with a "new and fully transparent and accountable Civilian Police Investigative Agency." It also suggests creating the post of deputy chief of diversity and inclusion.

Task force chairwoman Lori E. Lightfoot said in a statement the panel hasn't presented its report to Emanuel or the City Council and is disappointed "incomplete accounts of the a draft summary" were released. She added the task force "will provide full and accurate information on their finding and recommendations" on Wednesday.

Emanuel spokeswoman Kelley Quinn said the group is scheduled to brief the mayor on its recommendations Wednesday.

"The task force spent more than four months developing recommendations on an issue that is critical to the people of Chicago, and those recommendations deserve more than a cursory review of an early incomplete draft summary," Quinn said.

The draft became public as the Chicago City Council's Committee on Public Safety recommended a change in the municipal code so that Emanuel can name Interim Superintendent Eddie Johnson the next superintendent instead of picking from a list of finalists given to him by the city's police board. The committee also was considering whether to recommend Johnson for the job, and a final vote from the full council was expected Wednesday.

During his testimony before the City Council committee Tuesday, Johnson said he hasn't had a chance to review the report.

"We welcome recommendations and will take a look at all of them," he said.

Emanuel announced the creation of the task force at the same time he fired police Superintendent Garry McCarthy in the wake of public protests over the 2014 shooting by a white police officer of 17-year-old Laquan McDonald. A video of the shooting, released last year, contradicted police accounts that McDonald was threatening officers before he was shot.

"Reform is possible if there is a will and a commitment," according to the draft summary, which added that past and present conditions have left residents totally alienated from the police.

"And while many individuals and entities have a role to play, the change must start with (the Chicago Police Department). CPD cannot begin to build trust, repair what is broken and tattered unless — from the top leadership on down — it faces these hard truths, acknowledges what it has done at the individual and institutional levels and earnestly reaches out with respect," the summary says.

Some council members urged for Johnson to be appointed as quickly as possible because of the city's violent crime problem. They dismissed the suggestion by one alderman that changing, even temporarily, a process that has been in place for more than a half century would be a troubling and perhaps dangerous precedent.

"We don't have time to play," Alderman Walter Burnett Jr. said during Tuesday's debate. "People are dying in our wards."

Johnson is seen as a popular choice as an African-American and a 27-year department veteran. His rise within the force stands in stark contrast with the previous two superintendents, McCarthy and Jody Weis, both of whom are white and came from other law enforcement agencies.

While community leaders, aldermen and members of the department have praised Johnson, Emanuel came under fire for pushing to change the code rather than follow the normal procedures.

"The mayor didn't like the outcome and disregarded the process," Alderman Scott Waguespack said Tuesday before the meeting. "We understand the mayor wants this person to carry through on his policies, but there is also time to do it the right way."

Alderman Proco Joe Moreno called Johnson a "fantastic pick" while agreeing that the way the mayor and council are pushing him for the job might cause some to think the selection process is "another inside Chicago deal."

"In this case, you want someone in there who can tackle the problems from day one, and the process we had failed us," he said.

This story has been corrected to reflect the alderman's last name is spelled Waguespack, not Waguespak