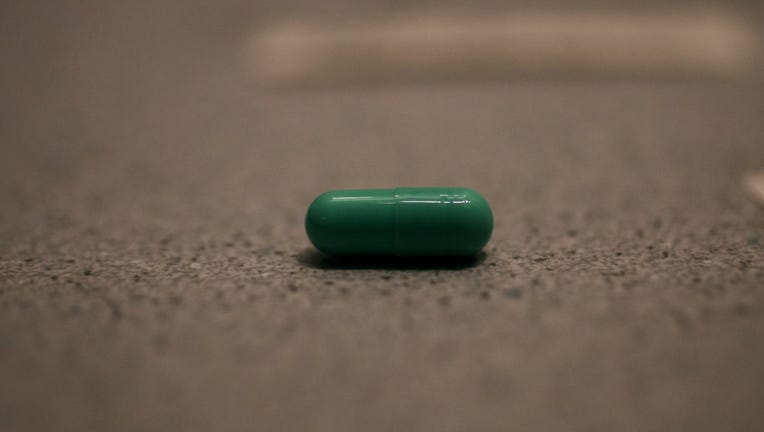 A dose of MDMA in the office of Dr. Michael Mithoefer, a psychiatrist, who has studied the use of MDMA as a treatment for PTSD in Mount Pleasant, SC, USA on August 24, 2017. (Travis Dove for The Washington Post via Getty Images)

[Editor's note: This story discusses suicide. If you or someone you know is having thoughts of suicide, please contact the National Suicide Prevention Lifeline at 1-800-273-TALK (8255).]

The Multidisciplinary Association for Psychedelic Studies (MAPS) recently announced they had received "expanded access" approval for the continued research into MDMA-assisted psychotherapy for PTSD, a major step toward making the drug legal for medical purposes. The Food and Drug Administration recognition of the drug’s effectiveness for trauma survivors furthers the organization’s efforts to destigmatize and make universal MDMA-assisted psychotherapy.

“We’re looking at possible FDA approval for treatment at the end of 2021, and the accessibility of treatment in clinics by 2022,” said Brad Burge, a spokesperson for MAPS.

The therapy has been so effective that it prompted a Special Protocol Assessment from the FDA, which Burge said is an agreement with the administration that if the Phase 3 trials are effective enough, the therapy will be approved.

Over the past several years, the nonprofit’s research has markedly advanced the prospects of MDMA-assisted psychotherapy as a medically accepted, and legal, form of treatment for PTSD. The clinical trials are part of a larger $26.9 million mission to make MDMA an FDA-approved prescription by 2021.

In the decades since MDMA was criminalized in 1985, it has garnered a reputation as a party drug. However, there has been growing movement to harness the drug’s effects to enhance traditional therapy.

“[The FDA’s] response has been really great. They’ve allowed these studies to move forward since the mid-90s.”

Even after its criminalization, MAPS was able to get FDA approval to test MDMA’s effectiveness in a number of therapeutic capacities. Now, it seems this decades-long effort to make the drug available to assist in therapy is coming to fruition.

Results of their research have been encouraging. A study of 26 veterans, firefighters and police officers with service-related PTSD found that two of the three testing groups responded positively to MDMA-assisted psychotherapy and had “significantly greater decreases in PTSD symptom severity,” according to results published in The Lancet Psychiatry in 2018.

“[The FDA’s] response has been really great,” Burge said. “They’ve allowed these studies to move forward since the mid-90s.”

One year after the end of the three MDMA-assisted sessions, 67 percent of participants reportedly did not meet the criteria for a PTSD diagnosis. The significant improvement of the trauma survivors’ symptoms gave the FDA enough confidence in the program to grant MAPS Expanded Access for people who haven’t found relief in traditional treatments.

Though the work with veterans has garnered the most headlines, Burge said the majority of the participants in the recent trials weren’t veterans or first responders. Many had developed their PTSD by way of sexual assault or domestic violence.

“What we’re seeing in the studies is that the effectiveness applies to people with PTSD from any cause,” said Burge. 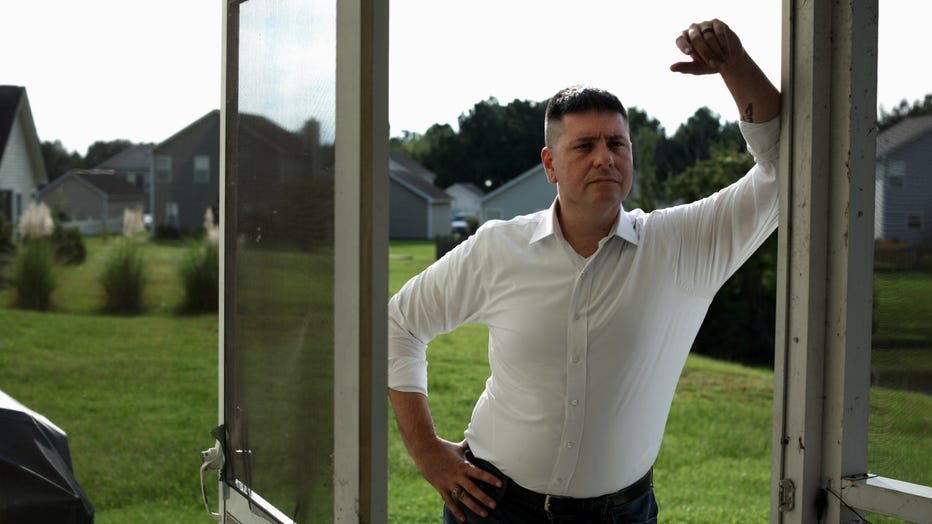 Jonathan Lubecky, former Army and Marine Corps veteran who returned from Iraq War with severe PTSD, outside his home in Summerville, SC, USA on August 24, 2017. Lubecky has participated in a study that uses MDMA to help treat PTSD. (Travis Dove for The Washington Post via Getty Images / Getty Images)

Lost in the statistics and medical jargon of FDA approvals and whitepapers is the human impact of the treatment. Jonathan Lubecky, who works as a part-time contracted lobbyist for the organization, is an Iraq War veteran who credits the therapy with saving his life.

Lubecky was a career military man until the combination of a traumatic brain injury and PTSD, sustained simultaneously, forced him to medically retire from the armed forces as an E-5 Sergeant.

From 1995 to 1999, he served in the Marine Corps. After the 9/11 terrorist attacks, Lubecky reenlisted, joining the National Guard a few days after the invasion of Iraq in 2003. He was stationed at Balad Air Base, which was notorious for a near-constant bombardment of mortar attacks.

Lubecky, now 43 years old, worked base security at Balad, and was using the outhouse when he said a mortar shell hit him. The blast wave concussed him, leading to a traumatic brain injury. The trauma from the incident would manifest years later as PTSD and force his medical retirement.

“MAPS saved my life. I wouldn’t be here, wouldn’t be talking to you right now, if it wasn’t for them and this treatment.”

Despite the injuries and trauma, he finished his tour of duty. When he returned from Iraq in 2006, he came home to a personal life upended and marriage on the verge of disintegration. The combination of PTSD and marriage problems proved too much, pushing Lubecky to attempt suicide five times over the years.

Twice, his pistol misfired when he put it to his head and pulled the trigger. Lubecky said the peace he felt in those milliseconds, “when the hammer was going to fall,” is the daily peace he credits to MAPS’ therapy. 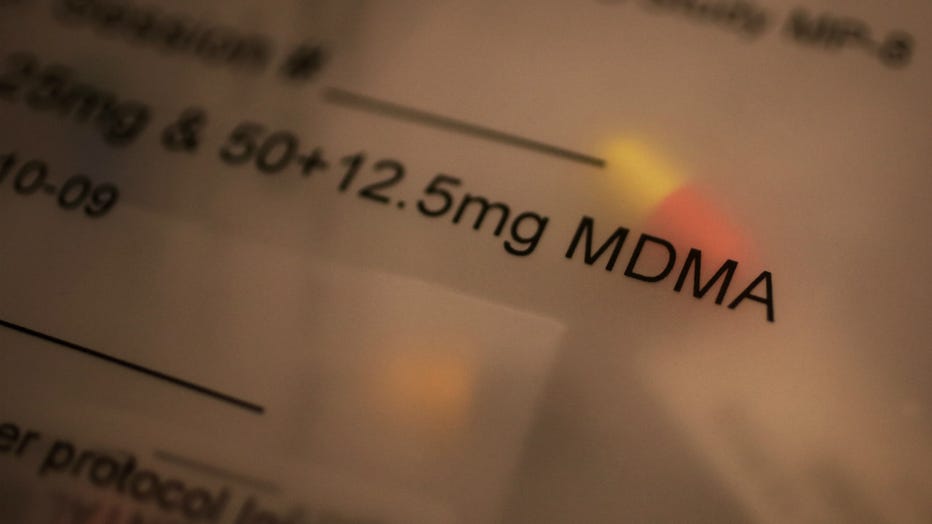 A dose of MDMA in the office of Dr. Michael Mithoefer, a psychiatrist, who has studied the use of MDMA as a treatment for PTSD in Mount Pleasant, SC, USA on August 24, 2017. (Travis Dove for The Washington Post via Getty Images / Getty Images)

“MAPS saved my life,” Lubecky said. “I wouldn’t be here, wouldn’t be talking to you right now, if it wasn’t for them and this treatment.”

He said he feels it’s part of his mission to spread the word of the effectiveness of MDMA-assisted therapy to trauma survivors.

“Five suicide attempts that should’ve ended my life, but didn’t,” he said. “I don’t want anybody on this planet to ever feel that way.”

Lubecky has lobbied members of House and Senate as well as local governments, crisscrossing the country to help MAPS garner the political support to enact their therapeutic agenda.

Among his proudest achievements of the past year is getting Reps. Alexandria Ocasio-Cortez, D-N.Y., and Matt Gaetz, R-Fla., two philosophically opposed politicians, to co-sponsor a bill on psychedelic research.

“As a [non-commissioned officer], I have to do this until everybody has access to it,” said Lubecky, adding, “the biggest thing I want people with PTSD to take out of this is that there is hope coming, there is help coming.”

Andrew Keiper is an associate producer with the Investigative Unit. You can follow him on Twitter at @keiperjourno.