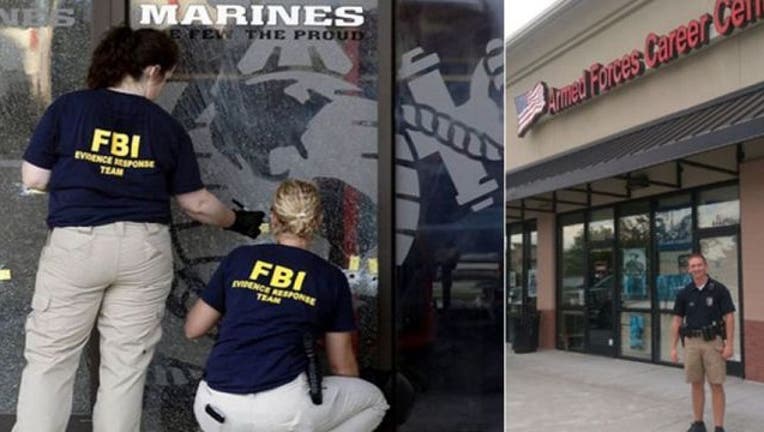 After the attack on a Chattanooga recruiting center last week, (l.), which preceded the deadly rampage at a nearby base, Police Officer Bobby Ruth stands guard at a center in nearby Cleveland, Tennessee. (Saralyn Norkus)

The Pentagon asked Friday that individuals not stand guard at the military recruiting offices in the wake of the deadly Chattanooga terror attack.

Pentagon Press Secretary Peter Cook said in a statement that Secretary of Defense Ash Carter “is currently reviewing recommendations from the services for making our installations and facilities safer - including our recruiting stations” following the July 16 attack that left four Marines and a Navy sailor dead.

“While we greatly appreciate the outpouring of support for our recruiters from the American public, we ask that individuals not stand guard at recruiting offices as it could adversely impact our mission, and potentially create unintended security risks,” Cook added.

In the days following the attack, citizens groups, veterans, local law enforcement and the National Guard have stood watch outside of recruiting offices across the country. It’s also raised questions over a 23-year-old federal policy that leaves service members unable to defend themselves on Pentagon property.