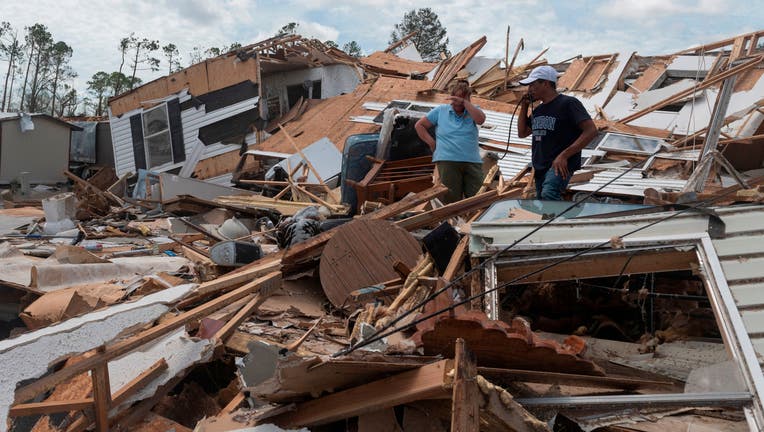 A couple react as they go through their destroyed mobile home following the passing of hurricane Laura in Lake Charles, Louisiana, on August 27, 2020. (Photo by ANDREW CABALLERO-REYNOLDS/AFP via Getty Images)

LAKE CHARLES, La. - The day after Hurricane Delta blew through besieged southern Louisiana, residents started the routine again: dodging overturned cars on the roads, trudging through knee-deep water to flooded homes with ruined floors and no power, and pledging to rebuild after the storm.

Delta made landfall Friday evening near the coastal Louisiana town of Creole with top winds of 100 mph (155 kph). It then moved over Lake Charles, a city where Hurricane Laura damaged nearly every home and building in late August. No deaths had been reported as of Saturday afternoon, but officials said people were not out of danger.

While Delta was a weaker storm than Category 4 Laura, it brought significantly more flooding, Lake Charles Mayor Nic Hunter said. He estimated that hundreds of already battered homes across the city took on water. The recovery from the double impact will be long, the mayor said.

"Add Laura and Delta together and it's just absolutely unprecedented and catastrophic," Hunter said. "We are very concerned that with everything going in the country right now that this incident may not be on the radar nationally like it should be."

Louisiana Gov. John Bel Edwards said no fatalities had been reported as of Saturday, but a hurricane's wake can be treacherous. Only seven of the 32 deaths in Louisiana and Texas attributed to Laura came the day that hurricane struck. A leading cause of the others was carbon monoxide poisoning from generators used in buildings without electricity.

"Everybody needs to exercise a lot of caution even now, and really, especially now," Edwards said.

It rapidly weakened over land and slowed into a tropical depression Saturday morning. Forecasters warned that heavy rain, storm surges and flash floods continued to pose dangers in areas from Texas to Mississippi. Large swells and rip currents closed beaches down to the Mexican border.

Remnants of the storm also could spawn tornadoes in the Tennessee Valley into Sunday, and flash floods could hit the southern Appalachians, the National Weather Service said.

Louisiana avoided one feared scenario: that the winds would pick up the debris left by Laura - piles of soggy insulation, moldy mattresses, tree limbs and twisted metal siding - and turn it into projectiles. In at least some neighborhoods, the small mountains stood on curbs more or less intact.

Delta inflicted most of its damage with rain instead of wind. It dumped more than 15 inches of rain on Lake Charles over two days and more than 10 inches on Baton Rouge. Southwest parishes such as Cameron, Jefferson Davis, Vermilion and Acadia that sustained heavy blows from Laura took the hardest hit.

The governor cautioned that it would be difficult to distinguish the damage Delta caused from what was leftover from the August hurricane. More than 9,400 people were being sheltered by the state Saturday, but only 935 were Delta evacuees, Edwards said. The others were still displaced by Laura.

Edwards said 3,000 Louisiana National Guard soldiers were mobilized to clear roads and to distribute meals and tarps, and 10,000 utility workers were working to get power restored to nearly 600,000 customers.

With the water knee-deep along Legion Street in Lake Charles, resident Patrick King had to wade through the water Saturday to get to his home after he returned from spending the night in Beaumont, Texas.

"I was hoping and praying that it didn't get into the house, but it did. It rose up close to the furniture," King said.

Before evacuating, he had put sandbags and plastic in the doorway to keep water out of his one-story brick house. Pulling them back upon his return, he saw worms and spiders scurrying about inside.

"It's totally frustrating and in fact, it makes you want to give up, but you have to keep on pushing," King said. "Me and my wife, we are praying people, so we just believe that God let things happen for a reason."

The damage also stretched inland, with trees shorn of leaves and falling onto streets in Louisiana's capital of Baton Rouge. The storm blew down two homes under construction in Galveston, Texas, and toppled the steeple of a church in Jennings, Louisiana.

Calcasieu Sheriff Tony Mancuso told KPLC-TV that the vehicles overturned on Interstate 10 should give pause to anyone thinking about rushing back to the disaster area.
"Rising water with all the rain is the biggest problem," Mancuso said. "It's still dangerous out there, and we're just going to have to start over from a few weeks ago."
The U.S. Gulf Coast is no stranger to hurricanes, and its people are resilient, Lake Charles resident Katie Prejean McGrady said. But the double punch of the back-to-back storms -- on top of the pandemic -- has left many in the community reeling, she said.
"I'm taxed out. And I think that's most people in town," she said. "There's a mental exhaustion that sets in and then there's a fear of `Does anybody outside this region care?"' she said. "The reality is our town won't be the same for a year, if not longer."
McGrady and her family had just returned to their home for the first time since evacuating ahead of Hurricane Laura when she was nine months pregnant. They arrived back in Lake Charles last weekend, got a new roof on Monday and had to evacuate again Thursday.
"My husband hadn't even unpacked his suitcase," McGrady said, who works for a Catholic publisher. "I had just put away my daughter's toys."